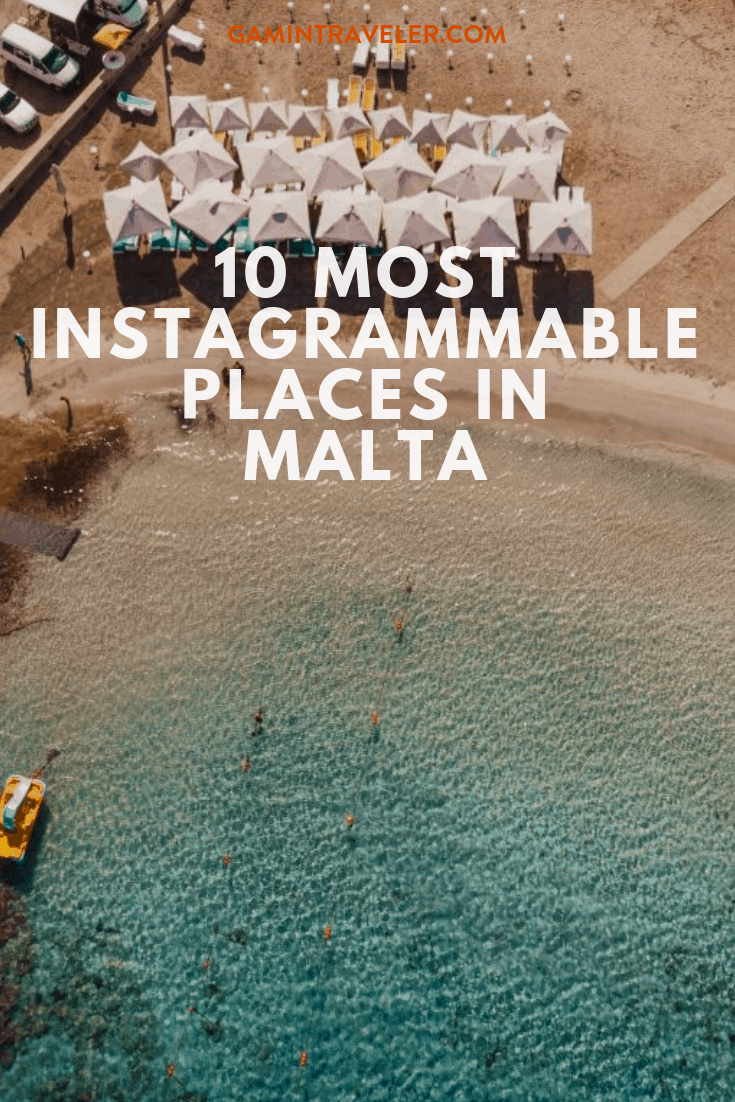 We will tell you all our most instagrammable places in Malta. It’s a nation known for historic sites related to a succession of rulers including the Romans, Moors, Knights of Saint John, French and British. It has numerous fortresses, megalithic temples and the Ħal Saflieni Hypogeum, a subterranean complex of halls and burial chambers dating to circa 4000 B.C. Read here Malta sim card for tourist, Maltese food, how to get from Malta airport to Gozo and Malta airport to Valleta.

How to get to Malta

Malta International Airport is the only airport in Malta and it serves the whole of the Maltese Islands. Airlines such as British Airways, Cathay Pacific,  Turkish Airlines and Emirates has flights to Malta with 1 to 2 stops.

There are several airlines that provide cheap flights to Malta, the main few being Ryanair, British Airways, easyJet and Air Malta. Depending on your budget you could opt for an airline such as British Airways while you’ll might spend more money than if you purchase your flight tickets from Ryanair. Check skyscanner for the best deals before your trip!

One of the biggest tourist attractions in Malta that people often see on Facebook and Instagram is the Blue Lagoon in Comino. This shallow bay is tucked between two islands and boasts of azure waters, making it a popular snorkeling and diving spot. From Cirkewwa in the northern tip of mainland Malta, a roundtrip ticket on a ferry to Comino (or Kemmuna) costs €10. Another popular option is to go on a day trip from Sliema, Buġibba or Qawra and spend the day at Blue Lagoon for €25-35. The boat day trip comes with a tour of nearby places in Comino. Blue Lagoon was in our top instagrammble places in Malta.

How to get to Blue Lagoon? You can get to Comino through the regular ferry service from Cirkewwa (the Northern most tip of Malta) and from Mgarr Harbour (on Gozo). The crossing to Comino takes around 25 minutes and costs around 10€ for a round trip. The stop on Comino is usually at San Niklaw Bay, on the north side of the island. 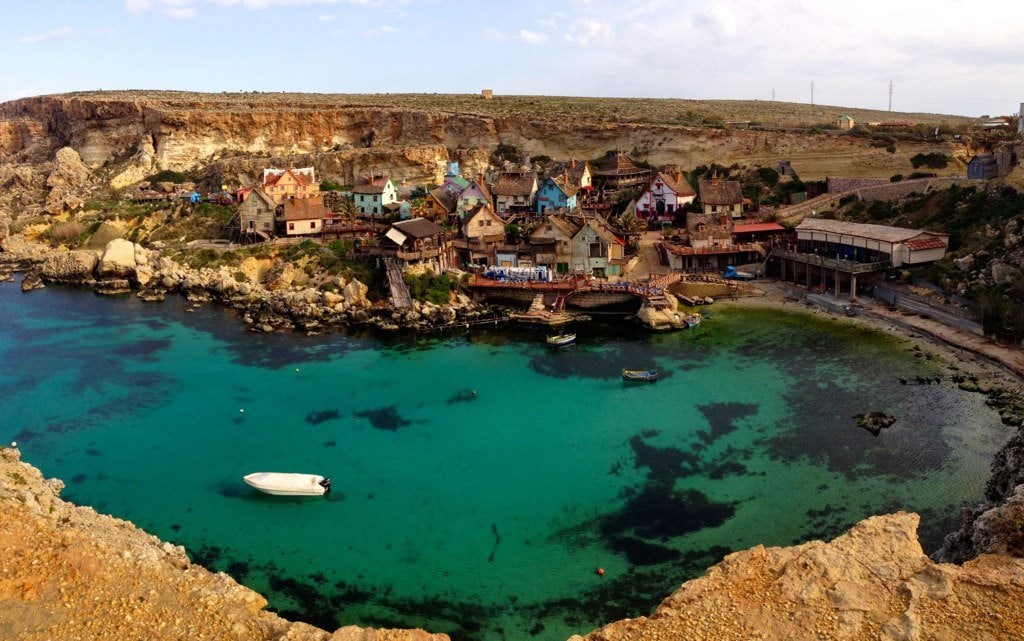 Popeye Village in Malta has grown from its days as a Film Set of the 1980 Musical Production ‘Popeye’ into one of the major tourist attractions on the Maltese Islands filled with a number of colorful fun activities for all young and young at heart. Open all year round and guarantees an enjoyable visit to all of the guests that would like to come.

Valletta is Malta’s tiny capital. The walled city was established in the 1500s on a peninsula by the Knights of St. John, a Roman Catholic order. It’s known for museums, palaces and grand churches. Valletta is Malta’s administrative and commercial hub as some government departments occupies a number of historical buildings. With its Baroque architecture, fortified city walls overlooking the Mediterranean Sea, and the spectacular Co-Cathedral of St John, which features intricately carved stone vaults and a famed painting by Caravaggio, it is no wonder that this smallest of European capital cities is a world heritage site.

How to get to Valletta? Malta’s most widely used form of public transport, bus routes, is accessible right outside the arrivals terminal of Malta International Airport, and the bus to Valletta is the X4 route. This bus route is available between around 5:56am and 10:55pm and passes from the Airport bus terminus every 20 or 30 minutes, depending on the time of day

Perhaps the most popular beach in Malta is Mellieha Bay, a family-friendly Blue Flag beach known for water activities like banana boating, canoeing, kite surfing, parasailing, water skiing and windsurfing. Also known as Ghadira Bay, this beach is the largest stretch of sand in Malta and is very accessible with public transportation.

How to get to Mellieha Bay? If you want to take the bus, you can take line X1 from the airport to stop “Adenau” in Mellieha. This line operates every 45 minutes in daytime. The trip takes around 1.5 hours and costs you €2 per person. In case you like to take a taxi, e-cabs is recommended. There are also other recommendable companies like x-cabs, green cabs etc.which you can download their app on your phone and order the taxi after you’ve arrived (airport provides free Wi-Fi). It usually takes about 5 minutes waiting time, they are reliable and give you the (fixed!) price during the booking process already.

Another famous beach in Malta is Golden Bay, located in the country’s northern region. Like Mellieha Bay, Golden Bay is popular among families because of its accessibility, wonderful amenities and delightful vibe. The beach has splendid views and is the perfect area to sunbathe. This sandy beach is also a great place to watch the sunset and enjoy barbecuing with fellow visitors.

How to get to Golden Bay? Bus and other options are relevant public transportation alternatives that may be used to reach your destination. The following transit lines have routes that pass near Golden Bay – Bus: 225, 44.

Armier Bay is located in the northern part of the main island of Malta. The beach is small but the colors of the water are so blue and crystal clear. It is easy to access and a really great place to put your beach mat down and have a swim during the day. The best way to get to Armier Bay is to drive a car to the site. Armier Bay is only a 5-minute drive away from Mellieha Bay.

How to get to Armier Bay? Several buses serve the area, although none will take you directly to Armier. That means you’ll have to walk for 15-20 minutes straight on until you reach the top of the hill where you see signs indicating, right to the ferry boat and to the left for Armier bay.

Before we saw the place with our own eyes, we didn’t know that Ramla Beach was actually a famous red sand beach in Gozo, Malta. Upon realizing this, we decided to spend our sunset there. We also enjoyed a few minutes of swimming until it got dark. It wasn’t busy destination and it’s a beautiful place to go hiking if you have time.

How to get to Ramlay Bay? For public transportation, there are two buses passing from this bay, route 302 which starts from Mgarr, Ramla Bay Gozo, Xewkija, Rabat, San Lawrenz and Dwejra. Then there is route 322, and starts from Mgarr (Ferry boat service to Gozo), Nadur, Ramla l-Hamra, Xaghra and ends at Marsalforn.

The gorgeous blue waters of Hondoq Bay make this place very special.  It is only 15 minutes away from Victoria where we stayed via car. As you can see in the picture above, it was quite crowded but still such a beautiful beach in Gozo.

How to get to Hondoq Bay? Unfortunately, there is no direct transportation to get you to the bay itself. You have to ride the bus 303 and get off at Qala Village’s bus stop. From there, it’s 15 to 20-minute walk or if you are in a tour, you’ll have private car to take you there.

Literally “Giants’ Tower” in English, Ggantija is a megalithic temple complex in Gozo. It is said to be from the Neolithic age, a time when wheels and metal tools are unheard of in the area, and is the earliest of its kind in Malta. Ggantija is made up of two temples and an incomplete third one and is a UNESCO World Heritage site. Legend tells us that a giantess who had a child with the common people built and used Ggantija as a place of worship. The site is open daily from 9 AM-5 PM with an entrance fee of €9. Ggantija is definitely worth the fee and is among the best places to visit in Malta.

How to get to Ggjantija Temples? One option is to hire a car, although it might prove difficult to find parking spaces if staying in or around Valetta. Another option is to use public buses. This pass could be purchased from the airport or the bus station outside Valetta. A 7-day pass costs only €21.

As Malta’s old capital and “silent city”, Mdina is neither boring nor forgotten. This historical site is where St. Paul was said to have lived after being shipwrecked in Malta. Mdina is also called the “noble city” because of all the impressive palaces, convents, monasteries and ancient walls found here. Fun fact: Game of Thrones did some filming in Mdina and fans of the show can go on guided tours to all the spots they used in the TV series.

How to get to Mdina? From the bus terminal in Valletta you can take a bus to Mdina. Bus N° 51, ​​52 and 53 that run every 10 minutes and will take you to Mdina in about half an hour. A ticket costs €2.60 per person (valid all day). You can buy it on the bus or at one of the ticket machines at the bus terminal.

There are cheap options that you can choose to stay in Malta. For advance booking, you might want to look at Booking for the best deals.

If you want to book in AirBnb, we can give you a $30 credit on your first booking if you click here!

We share our travel stories and experiences in this blog not just to document it but to also help other travelers for their future trip. If you love our content, please share our posts so we can reach more people who would also love to travel!

Budget Travel in Malta: How much do you need - Gamintraveler

Best Things to do in Malta And Beaches in Malta - Gamintraveler