Maltese people are also generally hospitable. Its isolation and tranquility can make you feel relaxed. Keep reading as we tell you Malta travel tips and all the things to know before visiting Malta in this post. If Malta’s rich culture of tradition, beliefs and practices isn’t enough to charm you to explore their island.

How about their numerous fortresses and megalithic temples? How about the beaches and the mountains? Malta might be a small island, but it can compare to top rated tourist centered countries for what it can offer.

Did you know that Malta is actually composed of 3 main islands? Malta is the biggest, next would be Gozo and last and the smallest one is Comino which you can reach via ferries. Read here Malta sim card for tourist, Maltese food, how to get from Malta airport to Gozo and Malta airport to Valleta.

The currency used in Malta is Euro just like any other European country. For €1 is equivalent to $1.16. Click here to know the exchange rate between the Euro and your currency!

The native language in Malta is Maltese but their official language are Maltese and English. 50% of them also speaks Italian. You can manage really good speaking English around the island but it would be nice if you learn a few words in Maltese language. People would love to see that you make an effort learning a few words in their language.

US and Canadian Citizens may enter Malta for up to 90-days only for tourist and business purposes without visa. Staying more than 90-days needs visa. Passports should also be valid for at least 3-months beyond the period of stay. EU nationals may stay for an unlimited period, but must register with the local authorities after three months.

4. Weather/Best time to visit in Malta

The climate in Malta is Mediterranean type and is influenced by the sea. Summers are very sunny, hot and dry. Winters are mild and annual rainfall is low. June and August is the highest time in Malta as tourists flock at that month yearly.

Hotels are booked like crazy and the beach is packed with tourists so it’s better to book in advance if ever you want to visit at that time. Click here to check the weather before visiting Malta.

5. Cash and ATM in Malta

It’s highly recommended to bring a mix of your card and cash. There aren’t too many banks on the streets of Malta but Euronet ATMs are all over the place. Big stores accepts cards but for smaller shops and businesses, they only accept cash. 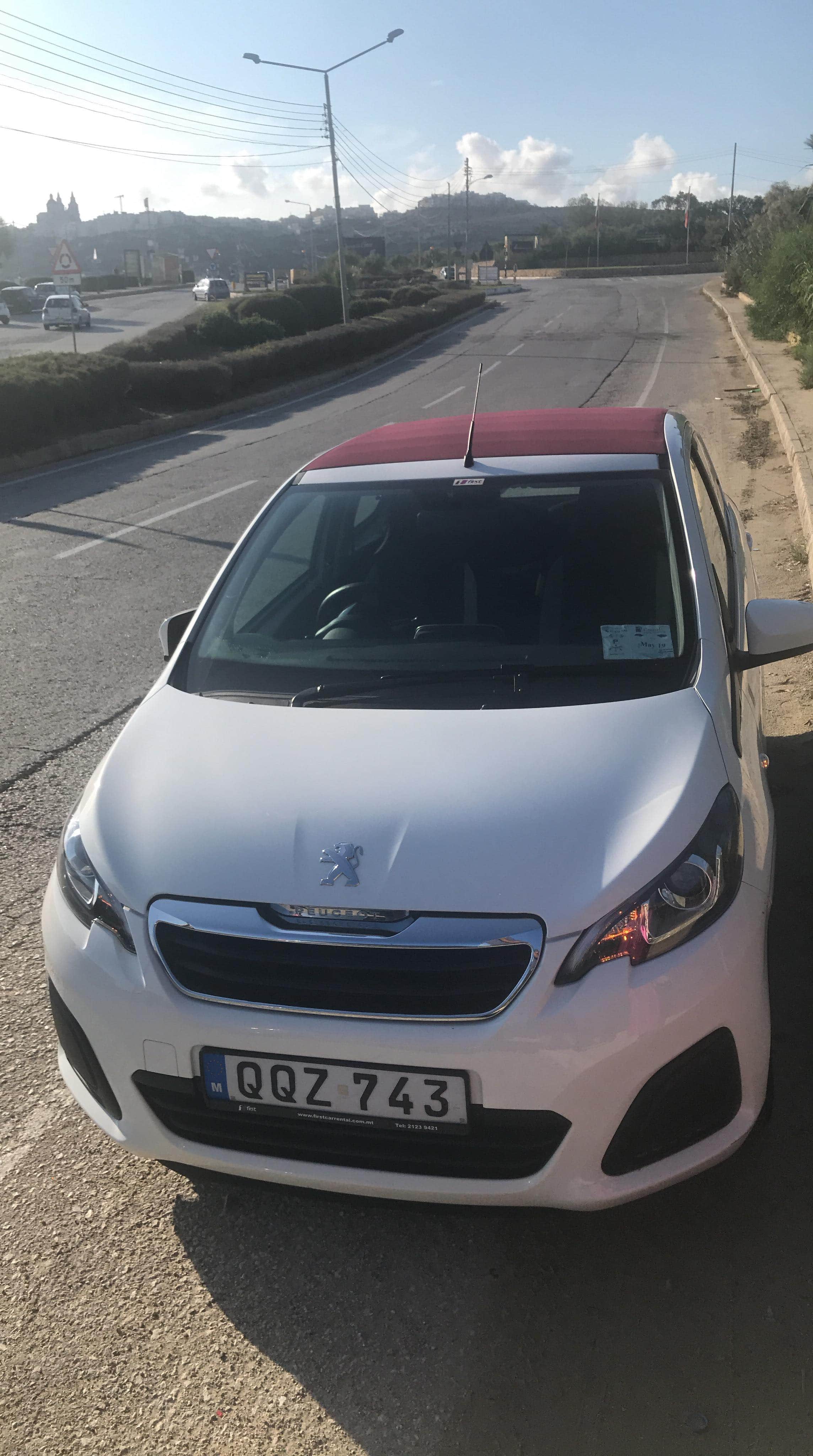 Malta’s towns and villages are connected through their road system, including the panoramic roads and the coastal roads. Taxis and other vehicles that can be rented are available throughout the island. Renting a car can cost €15-25 for the whole day and is convenient if you plan to stay shorter. You can have more freedom as to where you can go. Malta has no railways or trains. Taking bus is the most inexpensive way to go around Malta internally.

You can buy a single ticket for €1.50 on winter and €2 for summer. A 7-day pass is also available for €21 for adults and €15 for kids if you plan to stay longer. Ryanair, Air Malta, easyJet, and Lufthansa are the biggest carriers that service the island all year round. Mainland one-way flights can costs up to €50-100. Ferry services from mainland to Gozo costs €15 if you go by car included one person and around €5 if you go by foot.

Ma;ta Travel tips: If you are traveling two of you a car is the best option to move around Malta and prices are cheap. Prices in peak season are higher.

Read here if you want to be connected online when traveling the world!

Malta is fairly cheap. Hostels and dorms can only costs €9 per night but can go as high as double when summer. Budget hotels can cost €40 but AirBnb is ridiculously cheap! One house can go as low as €35 a night. Of course, food and drinks are also inexpensive.

You can stick to pastizzior savory filled pastries for just €1-2. Bottle of wines can go up to €8-10. Museum entrances costs €6 and a dinner for two in a nice restaurant with wine can cost €25 and up. Overall, it’s safe to say to have a budget of €40-50 per day for summer since everything is a little expensive.

Click here and you can get $30 USD off your first booking with AirBnB when you sign up with us!

Click here to get the best deals in Malta with Booking!

Things to Know before visiting Malta about Food

Lampuki pie is a typical and traditional Maltese dish made with lampuka fish.  Lampuka is the Maltese name for mahi-mahi, a mild, delicious white fish that forms the heart of a dish. Other ingredients are mint, lemon peel and raisins add some exotic punch.tomatoes, olives, capers. But removing the bones must be made with care as they can really sting.

Bigilla is a traditional Maltese dish, made of mashed beans. It is a delicious, versatile condiment and it’s usually eaten with salad, with dips or with crackers thus it can be found on parties!

Traditional Maltese stewed rabbit, better known as ‘Stuffat tal-Fenek’, is considered Malta’s national dish. It’s been around the Maltese Islands since the Knights of St John, which makes it a cultural delicacy that contributes to Malta’s rich heritage. This meal can be served as a starter or as the main, also fried in garlic or in red wine, accompanied with a whole lot of fries, bread and wine.

The main religion in Malta is Roman Catholicism, in fact, most Maltese claim to be Catholic and participate in Catholic religious services. Face-saving behavior is important in Maltese society, not only because of decorum and for the sake of maintaining the respect of individuals, but also to protect the honor of families.

The development of native, Maltese literary works has historically been disrupted by diglossia. Maltese writers developed an uninterrupted local “Italian” literary movement which went on up to about four decades ago, whereas Maltese as a literary idiom started to coexist on a wide scale in the last decades of the 19th century.

Malta might be commended in Brussels for its smooth presidency of the Council but back home, it’s quite different. Maltese people spend a lot of time and energy discussing politics.

Especially as the general elections draw closer.  Maltese politics is highly adversarial and polarized. Insularity has shaped Maltese culture and politics, and this aspect tends to be on full display in political campaigns.

Most Maltese place a high value on their family and relatives, which is evident through the close connections people maintain with family members. Children staying in their parental home even after they marry is one of the evidence of this trait, too.

Children also tend to stay in close contact with their grandparents. Dinner time is usually spent with immediate family. Maltese will go to various lengths to maintain harmonious family connections.

UNESCO listed 3 cultural world heritage in Malta. One of them is the City of Valetta, which is the capital of Malta. The city is built on a narrow peninsula surrounded by water.It is of sufficient size and includes all elements necessary to express its Outstanding Universal Value.

In spite of some rebuilding projects during the 19th century and severe damage during World War II, a high proportion of the original monuments and the surrounding urban fabric has been preserved intact or carefully restored.

Places to visit in Malta

Malta has a lot to offer when it comes to different type of things that tourists might want to see. They have beaches, mountains, historical architectural structures and megalithic temples. Each islands can give off different feels and vibes which can make visiting or travelling to Malta a worthwhile experience.

Valletta is Malta’s tiny capital. The walled city was established in the 1500s on a peninsula by the Knights of St. John, a Roman Catholic order. It’s known for museums, palaces and grand churches. Valletta is Malta’s administrative and commercial hub as some government departmens occupies a bumber of historical buildings.

With its Baroque architecture, fortified city walls overlooking the Mediterranean Sea, and the spectacular Co-Cathedral of St John, which features intricately carved stone vaults and a famed painting by Caravaggio, it is no wonder that this smallest of European capital cities is a world heritage site.

Gozo is an island of the Maltese archipelago in the Mediterranean Sea. It’s been thought to be the legendary Calypso’s isle of Homer’s Odyssey – a peaceful, mystical backwater. It’s known for its Neolithic Ġgantija Temple ruins, rural hiking paths, beaches and scuba-diving sites. But one of the most popular attraction in Gozo is the tour to Tal-Massar Winery.

The tourists can visit the beautiful vineyard itself and can partake in wine tasting accompanied by three traditional authentic Gozitan treats – galletti (Gozitan crackers) with dips, Gozitan sheep cheese and traditional bread with sun-dried tomatoes and cold pressed Gozitan olive oil. We loved the beaches in Gozo!

It’s a small bay with shallow, azure-coloured water that’s located on the West coast of Comino. You might want to avoid visiting on June to August as it will be crazily crowded if you want a relaxed vacation.

The Blue Lagoon is a must to visit in Malta and if you can visit first thing in the morning you will avoid the crowd.

From festivals to cultural events, Malta celebrates it all every year. Religious festivities are also a big deal for Maltese people. Every celebration commemorates food, drinks and having fun which brings out the local’s Mediterranean roots. The streets will be full of carts and people selling stuff.

Dates back up to 500 years, this is Malta’s own Mardi Gras where locals dresses into colorful and weird costumes and stunning floats floods the streets until late at night and processions. It is celebrated for a week leading up to the Ash Wednesday across Malta but in Valetta is where it is celebrated the biggest.

Ghana Fest is a four day festival that happens in late June at various outdoor sites all over the island. is a celebration of a traditional Maltese form of folk singing dating back centuries and it has three main forms: the two-man vocal duel of spirtupront, the emotional draw of the solo tal-fatt and the more melodic, guitar-driven sounds of fil-gholi.

Malta International Fireworks Festival is celebrated yearly every April to display the expertise of Malta’s firework factories. It is an event organised by Maltese tourism and cultural authorities, which invite Maltese and foreign fireworks factories to give an incredible show of light and music for two days. The event takes place in the Grand Harbour of Valletta.

Click here and you can get $30 USD off your first booking with AirBnB when you sign up with us!

Click here to get the best deals in Malta with Booking!

And also read our things to know before visiting Greece.

Please give us some love by sharing this Malta Travel tips and things to know before visiting Malta post to your friends!

10 Most instagrammable places in Malta - Gamintraveler

[…] here things to know before visiting Malta, 10 Most Instagrammable places in Malta and budget travel in […]

Budget Travel in Malta: How much do you need - Gamintraveler

[…] For more related posts in Malta: read our things to do in Gozo and things to know before visiting Malta. […]

[…] Read here or budget travel in Malta and things to know before visiting Malta. […]

13 Awesome Things to do in Gozo (Travel Guide) - Gamintraveler

[…] here things to know before visiting Malta and budget travel in […]