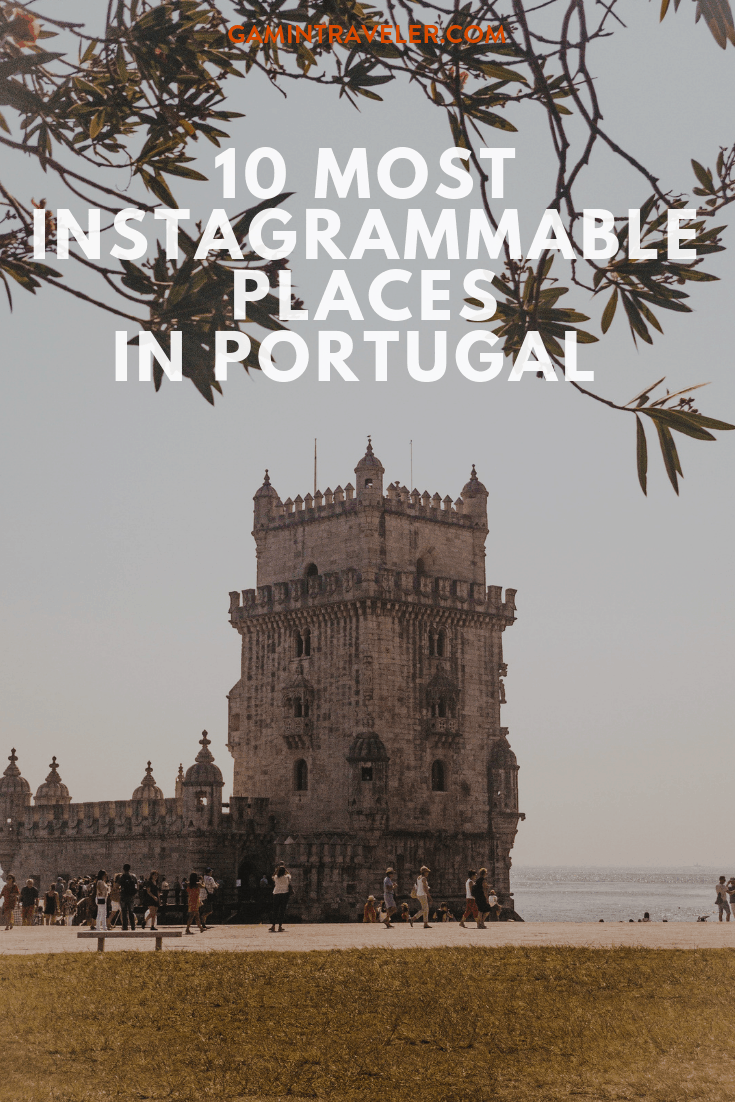 Portugal is a southern European country on the Iberian Peninsula, bordering Spain. Its location on the Atlantic Ocean where it has influenced many aspects of its culture: salt cod and grilled sardines are national dishes and the Algarve’s beaches are a major destination and much of the nation’s architecture dates to the 1500s–1800s.

We enjoyed a road trip to Algarve, also an amazing time in Lisbon in our Europe trip. We will tell you our most instagrammable places in Portugal in this post.

Read here Portugal sim card for tourist, Portuguese food,  all the things to know before visiting Portugal and our top 10 Instagrammable places in Lisbon!

How to get to Portugal

Portugal has three international airports; Lisbon, Faro and Porto. These three airports cover the entire country, and provide numerous international routes, which are flown by a variety of airlines including national and low-cost airlines.

There are direct flights from US to Lisbon. United Airlines and TAP Portugal offer daily direct flights from JFK and Newark airports. You can get a ticket to Faro for as low as $250 USD. In London, you can get on a 3-hour flight to Algarve for less than £40 GBP. If you’re coming from Milan, you can reach Algarve for less than €70. You can always check SkyScanner.com to see the cheapest rates for your trip to Portugal.

Most Instagrammable places in Portugal 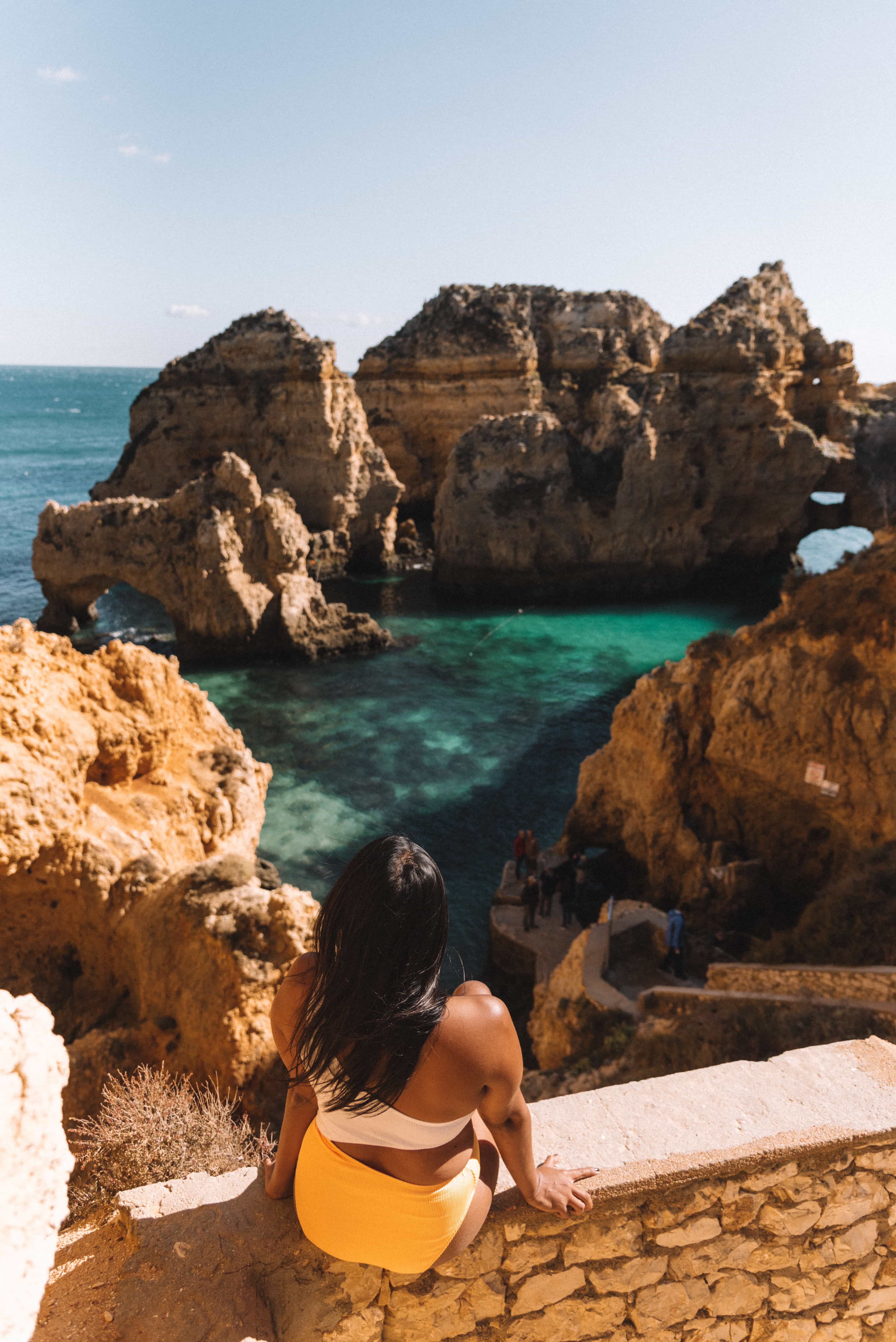 Ponta da Piedade is a group of rock formations along the coastline of the town of Lagos, in the Portuguese region of the Algarve. Consisting of yellow-golden cliff like rocks up to 20 meters high, they are one of the most famous touristic attractions of Portugal.

How to get to Ponta da Piedade? There are numerous boats trips available that will take you around the rock pillars, through the natural tunnels and into the grottoes. There are tours available for this if you would be interested. But for adventurous travelers, if you want to stay in-land, you can reach it by car. From the parking lot, you have to go down narrow stairs that will lead you down to a small cove.

This is our favorite beach in Algarve in Portugal and it’s located just a few kilometers from Lagos. The picture is from the top and you can go down to access to the beaches under the caves. The sunset along with the low tide was so beautiful and if you go to the far end of the beach, you will enjoy tranquility and even more space. The water is a clear blue, and if you go up the cliff, the views are really breathtaking.

How to get to Praia dos Tres Irmaos? You have to drive until Portimao and going down to the Praias. It’s close to Praia da Rocha and Praia do Alemao. 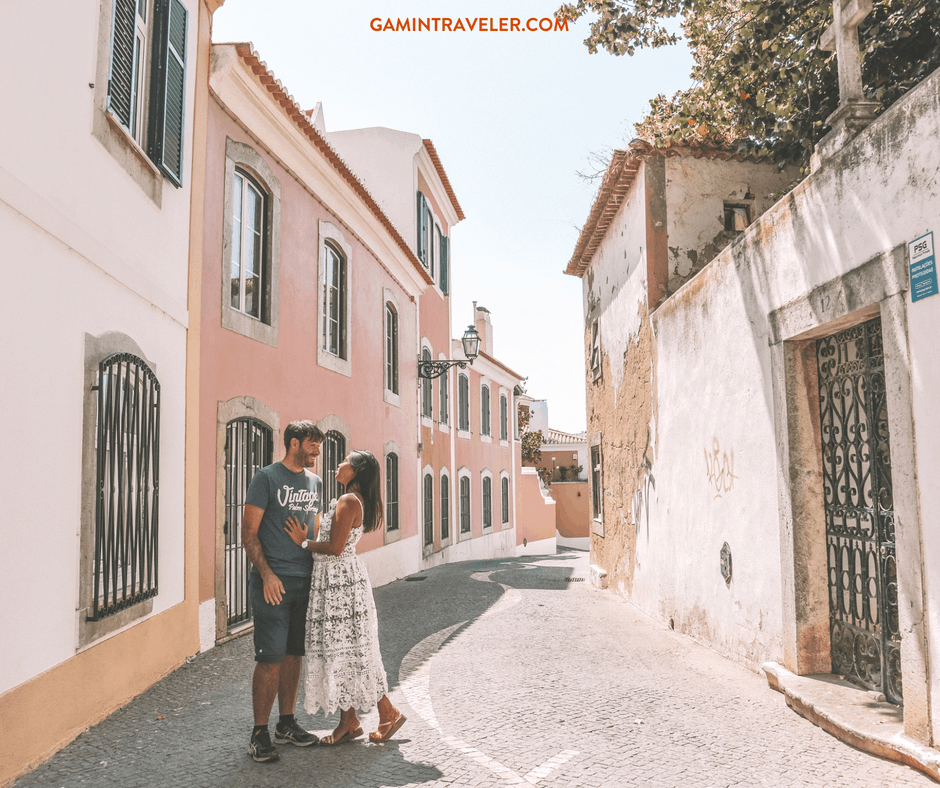 Cascais is a coastal resort town in Portugal, just west of Lisbon. It’s known for its sandy beaches and busy marina. The old town is home to the medieval Nossa Senhora da Luz Fort and the Citadel Palace, a former royal retreat.

How to get to Cascais? Public transport from Lisbon airport to Cascais requires the metro or bus (called the Aerobus) to Cais do Sodre train station and then catches an urban train to central Cascais. The entire journey by public transport costs less than €5 and the typical journey time is 1 hour and 30 minutes.

Read here how to get from Lisbon airport to Cascais! 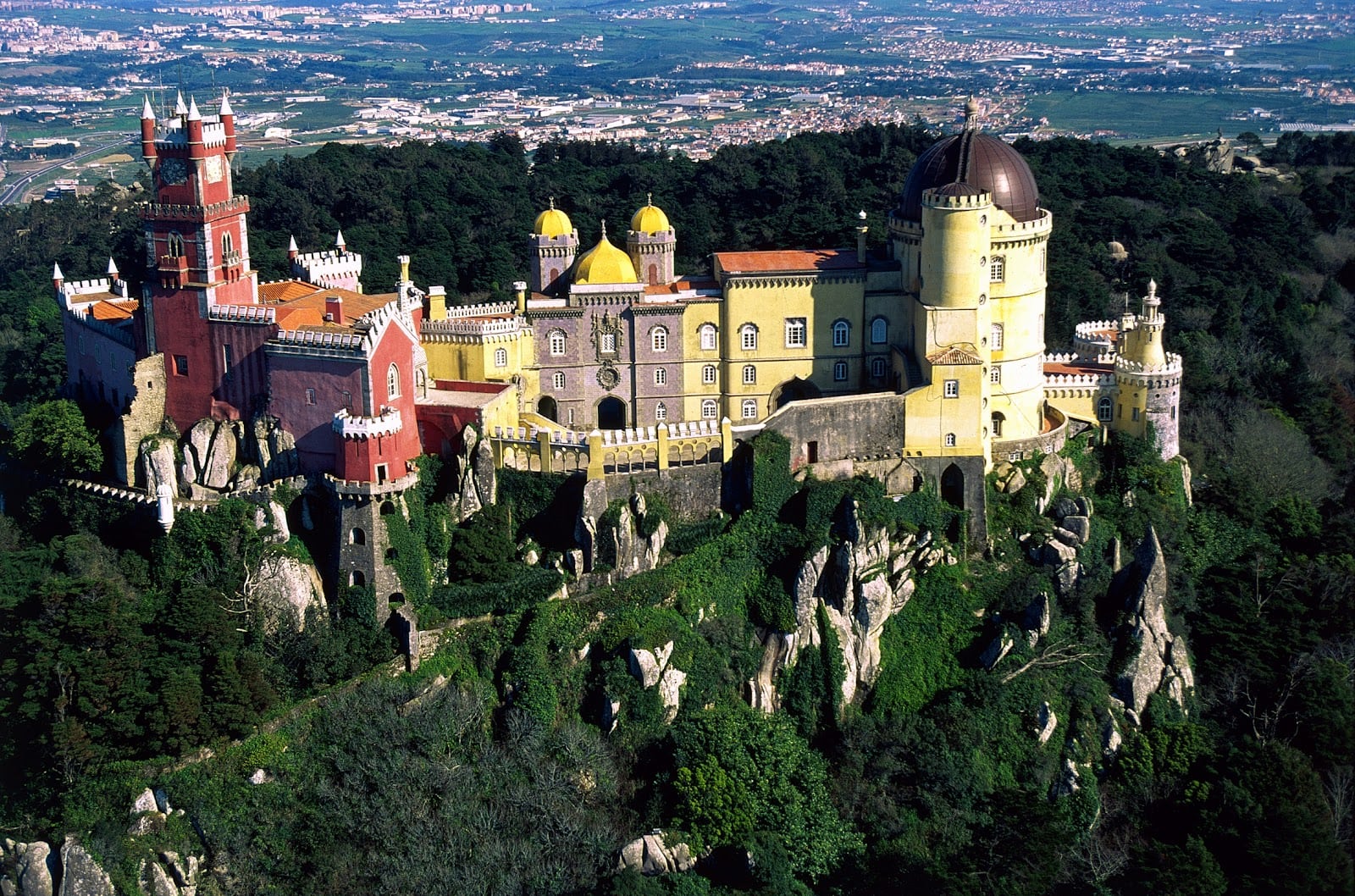 Sintra is a resort town in the foothills of Portugal’s Sintra Mountains, near the capital, Lisbon. A longtime royal sanctuary, its forested terrain is studded with pastel-colored villas and palaces. The Moorish- and Manueline-style Sintra National Palace is distinguished by dramatic twin chimneys and elaborate tilework. The hilltop 19th-century Pena National Palace is known for a whimsical design and sweeping views.

How to get to Sintra? If you are coming from Lisbon, you can take a train from Rossio station to Sintra. It will take 45 minutes and will cost €2.25 per one trip. 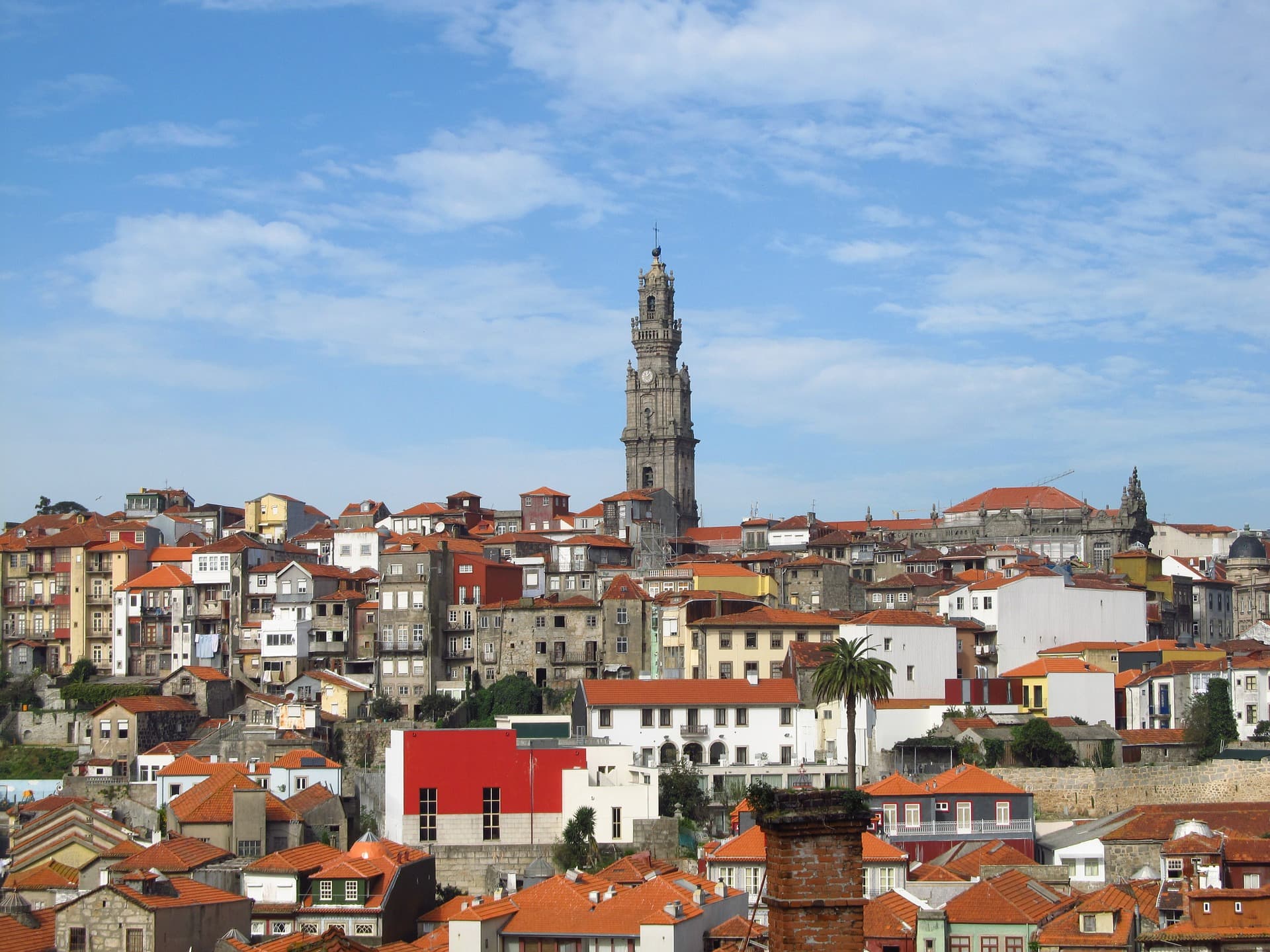 Read here how to get from Porto airport to city center.

The number 28 Lisbon tram connects Martim Moniz with Campo Ourique, and passes through the popular tourist districts of  Graca, Alfama, Baixa and Estrela. For visitors, this is the classic Lisbon tram journey, riding in the quaint yellow tram as it screeches and rattles through the narrow streets of the city. 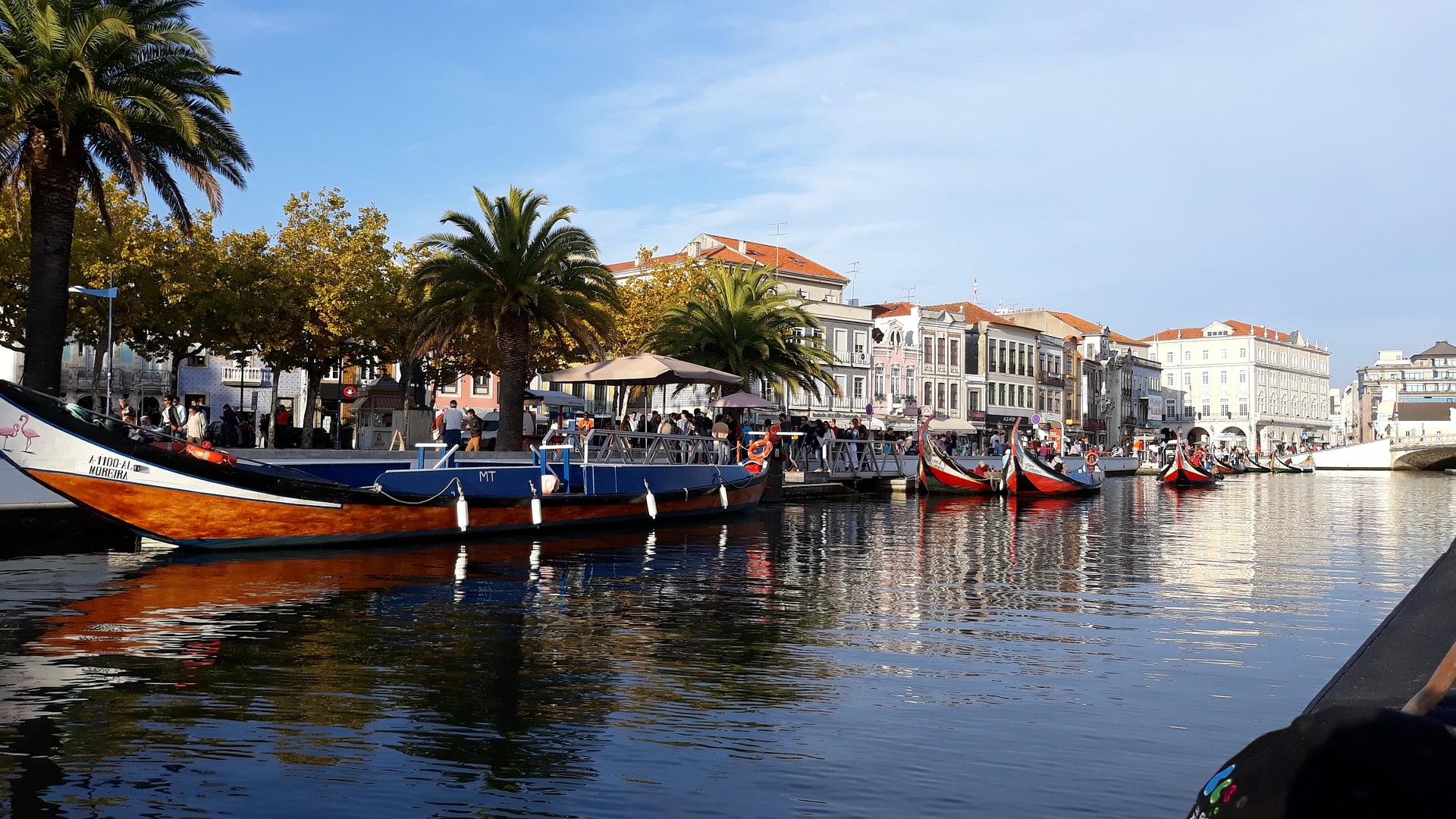 Aveiro is a city on the west coast of Portugal set along a lagoon called Ria de Aveiro. It’s distinguished by its canals navigated by colorful boats (barcos moliceiros), traditionally used to harvest seaweed. Not far from its core, known for art nouveau buildings, is the Cathedral of Aveiro, with its prominent bell tower.

How to get to Aveiro? You can ride trains from Porto that departs initially from São Bento Train Station, situated in the city center, and then pass through Porto’s Campanhã Train Station before heading south to Aveiro. A  single ticket may cost between 2.5€ and 15€.

Cape St. Vincent is a headland in the municipality of Vila do Bispo, in the Algarve, southern Portugal. It is the south westernmost point of Portugal and of mainland Europe. The cape takes its present name from a Spanish priest martyred by the Romans.

How to get to Cabo de São Vicente? Cabo de São Vicente can be reached by public transportation or buses if you’ll be coming from Sagres and Lagos. The service departs from Lagos at 10:30 passes through Sagres at 11:15 and arrives at Cabo de Sao Vicente at 11:25.

Read here How to get from Faro airport to Lagos.

A small fisherman’s village located in the municipality of Albufeira, Portugal. It is one of the beaches that is great for families because of its direct access from the village and offers variety of services. It is a beautiful beach, and in the low tide, you can watch its famous natural springs coming out of the sand known by the locals as “Olhos de Agua” (water eyes). Staying there until the sunset will surely captivate you with its beauty.

How to get to Olhos de Agua? Olhos de Agua is on a main bus route serving Albufeira in one direction, Vilamoura, Quarteira, Almancil and Faro in the other. From Faro to Albufeira, fare can cost €2.25 per ride.

This iconic symbol sitting right by the river is an architectural gem in Lisbon. Torre de Belem was first built to defend Lisbon but was then used as a lighthouse and also as a customs center. The tower was completed in 1520 and has been a UNESCO World Heritage site since 1983. On the western façade of the tower, you will see the famous rhinoceros-shaped gargoyle. Make sure to take lots of pictures here as a visit costs €6. The site is open from Tuesday to Sunday from 10 AM to 5:30 PM, or 6:30 PM in the months of May until September.

Accommodations in Portugal can be cheap depending on what you are looking for. You can check hotels and dorms using booking!

You can click here so you can get $30 USD off your first booking with AirBnB when you sign up with us!

[…] here Portuguese food, Road trip to Algarve, the most instagrammable places in Portugal and all the things to know before visiting […]