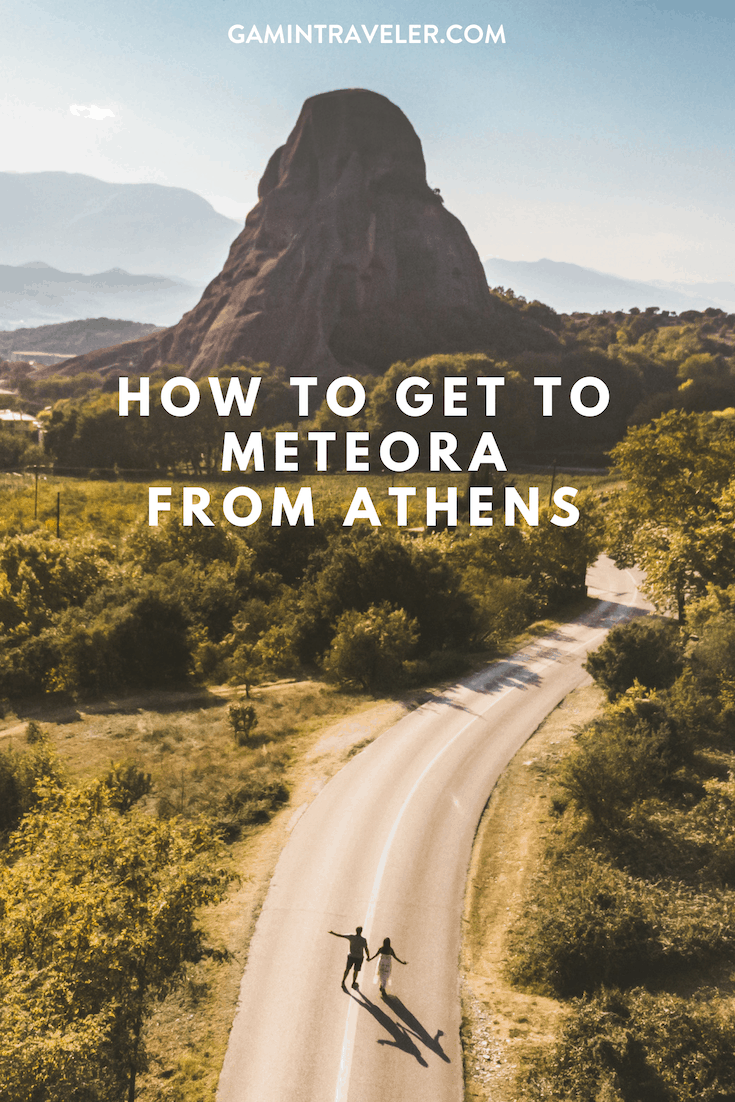 After visiting the islands Mykonos and Santorini, we decided it was about time to visit Meteora on our way to North Greece in Thessaloniki. We will write how to get from Athens to Meteora a rock formation located in Central Greece.

Meteora is the second most important complex Orthodox monastery after Mount Athos. There are 6 monasteries included in UNESCO World Heritage list and we will tell you about these monasteries in this blog post: how to get from Athens to Meteora by train, car and bus.

Also things to do in Meteora, monasteries to visit in Meteora and where to stay in Meteora in our Meteora travel guide. If you are going to Meteora, read this blog post with our Meteora itinerary because we’ll also include the prices and schedules for trains and buses.

If you are planning a day trip to Meteora, we will tell you how to get to Meteora from Athens. We recommend you if you have the chance to spend 2-3 days around Meteora. But if you have a tight schedule, we will provide full information of schedule of trains, buses and monasteries for your trip to Meteora.

Read here our top 10 Instagrammable places in Greece and things to know before visiting Greece!

How to get from Athens to Meteora from by train

If you want to get from Athens to Meteora by train. From Athens train station you can get the train to Kalampaka which is the city below Meteora. Kalampaka is a terminal station, meaning that if you get on a direct train, you won’t have to worry about getting off at the right station. It will be the last one!

There is a direct train and also there are indirect trains with a switch at Palaeofarsalos and from there, it will be a 30-minute ride to Kalampaka or Trikala. Prices are around €20 for one way.

Click here to book the tour from Athens to Meteora with Klook!

If you want to get from Athens to Meteora by bus. First of all, you have to go to Liosion bus station in Athens. Buses depart from 7:30am to 9pm everyday. The journey takes about 4 hours and 30 minutes to Trikala.

How to get from Athens to Meteora by car

Click here to book the tour from Athens to Meteora with Klook!

How to get Meteora from Thessaloniki

Thessaloniki is in the north of Meteora, 230 km away from Kalambaka. It takes just 2 hours and 30 minutes to travel by bus, train or car.

How to get to Meteora from Thessaloniki by bus

There are a few buses running from Thessaloniki to Meteora everyday. The buses depart from Makedonia bus station and it takes 2 hours and 30 minutes and one way costs €20 by bus.

Check out the schedule and prices!

How to get to Meteora from Thessaloniki by train

There are just a few daily train schedules running from Thessaloniki to Meteora. Prices are around €15 and it takes 2 hours and 30 minutes to get to Meteora.

Check out the schedule and prices!

While the months of July and August are a great time to travel Meteora, the place gets very crowded with all the tourists deciding to cool off the summer heat at Greece.

To enjoy a quieter, less crowded vacation, the best time to visit Meteora is the middle of May to June and from September to mid-October. December to March can be cold and rainy. Click here to know more about the weather in Meteora!

For your Meteora itinerary if you can spend one day can be enough but if you have time 2 days will be perfect. We spent a couple of days arpound the area.

For transportation, if you are staying in Kalampaka and Kastraki, you will spend just a few euros going around by bus if you want to visit town around like Trikala.

For food, there are places to eat for €3-7 and you can get a meal already. There are different types of accommodations, from €8-25 dorm and campings, guesthouses and hotels.

You can also rent Airbnb for €20. and you can get $30 USD off your first booking with AirBnB when you sign up with us!

CLICK HERE TO BOOK YOUR ACCOMMODATION BEFORE YOU TRAVEL METEORA WITH BOOKING. COM!

Things to do in Meteora

Meteora has hiking tours, and it is one of the best ways to enjoy some geological phenomenon, as well as to learn the history of a UNESCO World Heritage site. Experience the nature at its best and enjoy great views.

Remember that you should wear shoes that has good quality for hiking, remember to apply sunscreen, bring food and water, and bring raincoat, just to be sure that when it rains, you’ll be protected. You should definitely explore the gigantic rock pillars of Meteora.

There are almost 800 climbing routes in Meteora. Climbing in Meteora is so challenging but it is one of the most preferred places for climbing in Europe. It is a real adventure so buckle yourself up and make sure that you are prepared for this one-of-a-kind experience.

You’ll have to bring sunscreen, food, and water. The climb has two major categories- the cracks and slabs. and it is up to you which one you prefer.

Cycling in Meteora is unique and fascinating. Meteora is at the heart of this ancient land. The highlight of your biking experience will be the Legendary landscape, experience and know more about the magic, mystery and ancient history of the place. If you like cycling, you can read our blog post cycling Camino de Santiago, another epic travel! 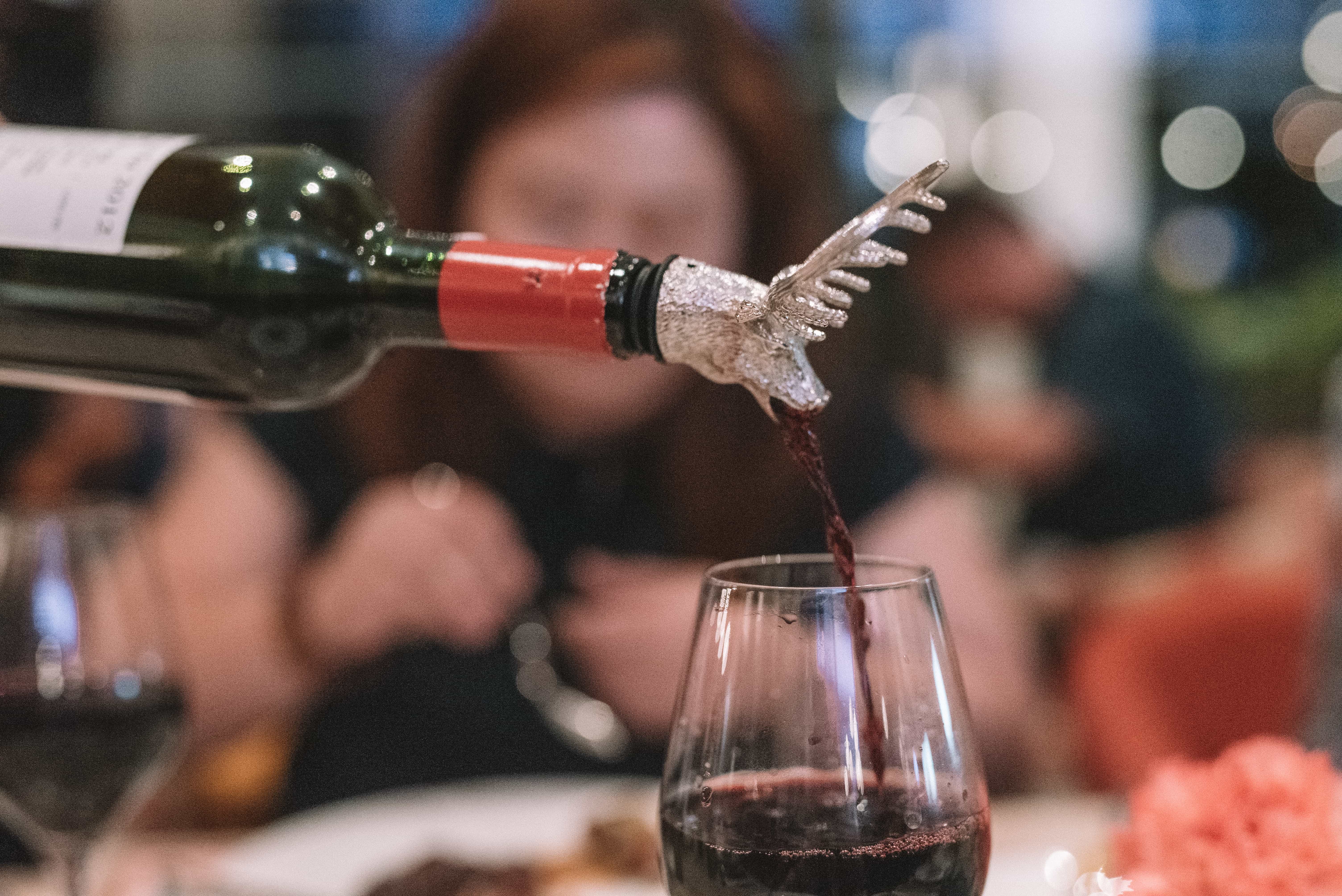 Meteora isn’t just a place where you’ll be able to see UNESCO World Heritage Sites, it is also a perfect destination for wine tasting. There are wine tours available in the villages around Meteora.

You’ll maybe want to try the tradition soutzouki, made with unfermented grape juice and nuts. And a lot more of specialty wines awaits you in Meteora!

Extraordinary, breathtaking, immense, impressive and inspiring. Only few words from some of people that have visited the monasteries when they describe the Meteora phenomenon. Meteora is an inspiring and sensational setting of overwhelming rock formation. It is a pilgrimage to a holy place for all Christians around the world.

It was founded by a monk from Mont Athons in 14th century. It´s closed every Tuesday, and the visiting hours would be 9am to 5pm from 1st of April to 31st of October. From November 1st to March 31st, it opens from 9 am to 3 pm and it´s closed Tuesdays and Wednesdays.

It was founded in 16th century and the monastery is accessible by a bridge. It´s closed on Wednesdays, and the visiting hours would be 9am to 6pm from 1st of April to 31st of October. From November 1st to March 31st, it opens from 9am to 2pm and it´s closed Wednesdays.

It was built in 14th century and it´s popular because of James Bond movie “For your Eyes only”. It´s closed on Thursdays, and the visiting hours would be 9am to 5pm from 1st of April to 31st of October. From November 1st to March 31st, it opens from 10 am to 4 pm and it´s closed Wednesdays and Thursdays.

It was founded by a monk called Varlaam in 14th century. It´s closed during Fridays, and the visiting hours would be 9am to 4pm from 1st of April to 31st of October. From November 1st to March 31st, it opens from 9am to 3pm and it´s closed Thursdays and Fridays.

It was founded in 14th century. It´s occupied for monks nowadays. It´s closed during Fridays, and the visiting hours would be 9am to 3:30pm from 1st of April to 31st of October. From November 1st to March 31st, it opens from 9am to 2pm and it´s closed on Fridays.

Food to try in Meteora

Our favorite ones for a quick snack was Gyros and Souvlaki, which we usually eat after hiking in Meteora. The difference is gyros comes from turned meat and souvlaki is grilled from the stick. Both are delicious and are served with salad, sauce and french fries. Price starts from €3.

A meal that is a “hit” to everyone. A fried piece of heaven, this veggie starter will become your new favorite dish. It is a popular Cretan ouzo meze, that is available all throughout the island. It is best served with yogurt dip.

It is a Greek staple food, and is served as an appetizer. The name comes from the pan where the cheese is fried. Most restaurants around the island offer this dish. The cheese is fried in oil and served with lemon sedges and bread.

An iconic Greek comfort food the is available and prepared for all. It is a type of Lasagna dish that has thinly sliced eggplant instead of pasta.

Where to stay in Meteora 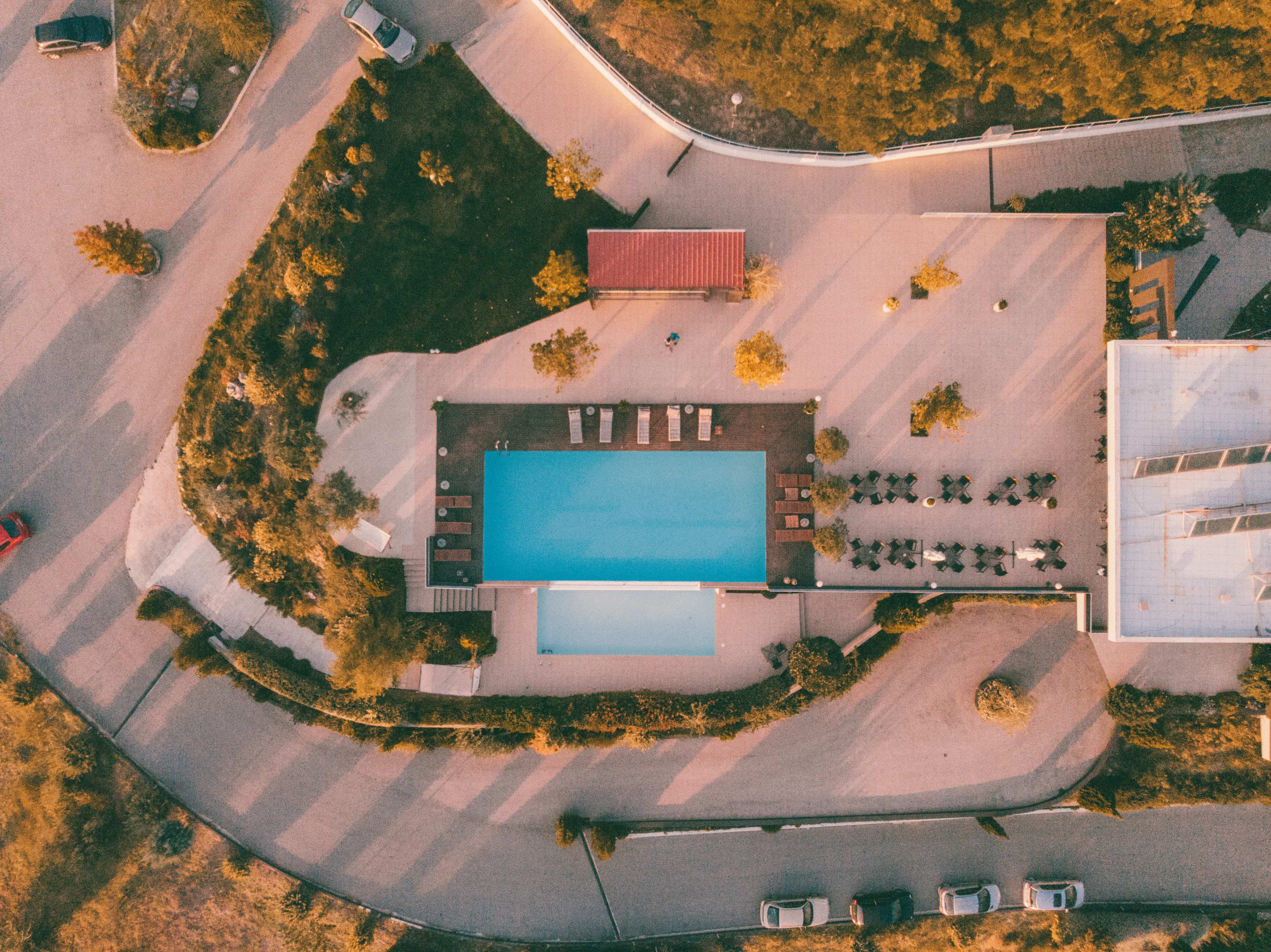 There are two towns next to Meteora: Kalampaka and Kastraki.

Kalampaka is the most popular since it´s the closest bus and train station. There are restaurants, shops, hotels and guesthouses.

Kastraki village is the closest to Meteora and you can go walking distance from here for only 2 kilometers. There are guesthouses and campings, too. It´s great if you are planing to hike to Meteora.

Another option is staying in Trikala like we did. It´s a quiet and beautiful town. There are bars, restaurants and as we mentioned before, it’s only a 30 to 40-minute ride by bus from Meteora.

We stayed at Ananti City Resort in Trikala. It’s an amazing place to visit on top of the hill in the town of Trikala. Sunsets and sunrise here are so colorful and the views of the city are awesome. People are super friendly and the food is so tasty too. We had amazing time there from resting from our Meteora hikes to having our massage and jacuzzi experience.

You can get $30 USD off your first booking with AirBnB when you sign up with us!

CLICK HERE TO BOOK YOUR ACCOMMODATION BEFORE YOU TRAVEL METEORA WITH BOOKING. COM!

The most cosmopolitan feast in Meteora is Easter, that is attended by thousands of visitors every year. The Monks and nuns follow and austere feast which is at Holy Friday, where they won’t eat and drink water. All around the village families prepare the traditional lamb of the pit.

The cultural events of Meteora Technis are celebrated every summer in Kalambaka. The events last from July to September. There are theater performances, concerts of traditional Greek and international Greek artists, and many more.

If you like this Meteora travel guide feel free to share with your friends in your social media and you will help us a lot!