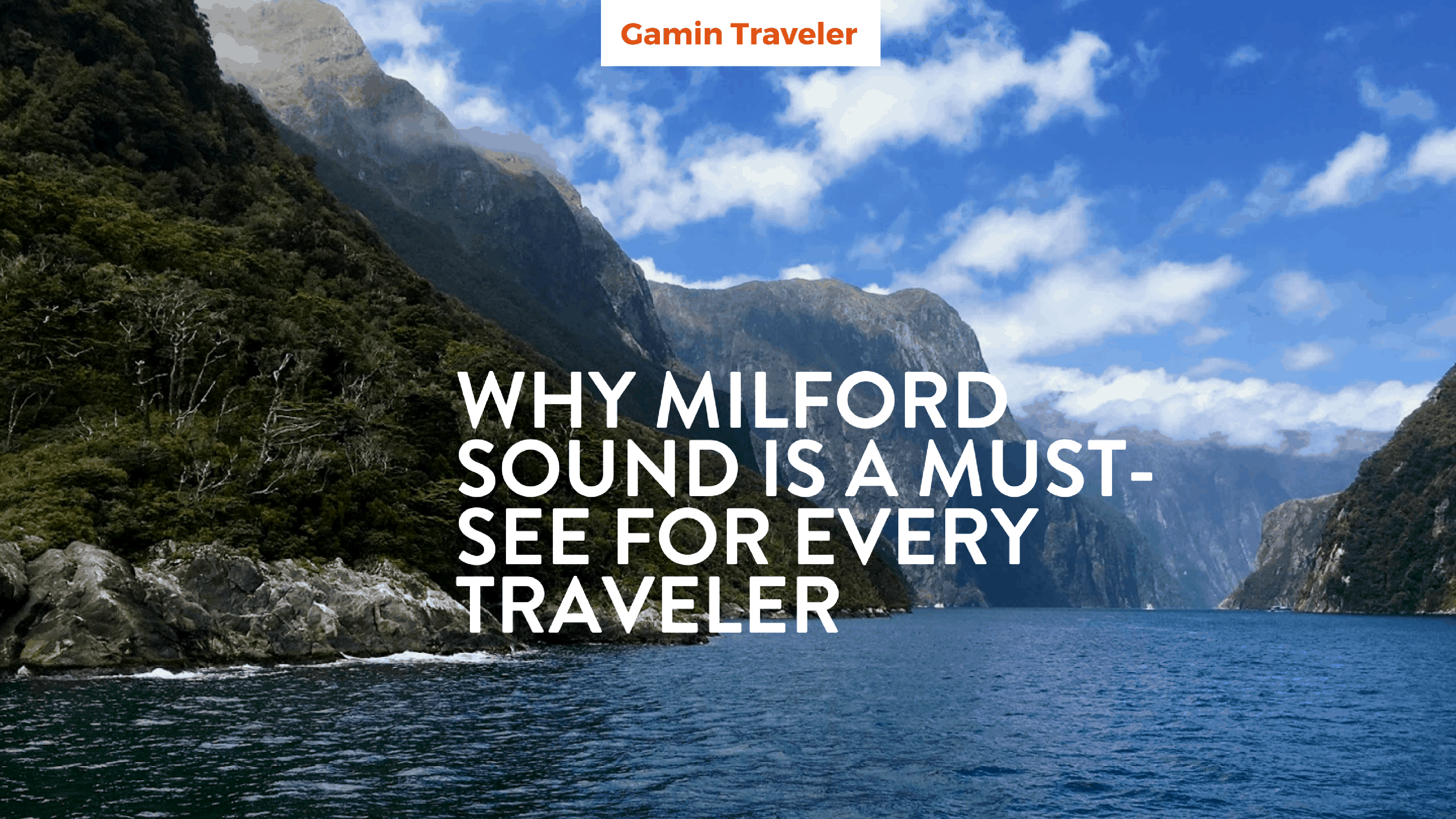 New Zealand is a country known for having several of the most breathtaking sites Earth has to offer. Perhaps, the most beautiful place to visit in the entire country is Milford Sound, located on the southwest corner of New Zealand’s South Island. Milford Sound was incorrectly identified as a sound, as it’s actually a fjord–meaning it’s a long, narrow sea inlet between high cliffs that was formed by glaciers. One of Milford Sound’s main features is its waterfalls. They can number in the hundreds during one of its rainy days, which are frequent since Milford Sound is technically part of a rain forest.

Milford Sound is so remarkable that Rudyard Kipling, the author of The Jungle Book, referred to it as “the eighth wonder of the world.” So it’s no wonder that nearly one million people visit Milford Sound each year. This is incredible, especially after you consider that’s roughly equal to the human population of New Zealand’s South Island.

Milford Sound was my favorite place to visit during my nearly year-long New Zealand adventure, with plenty to do there and even more to see.

How to get to Milford Sound? 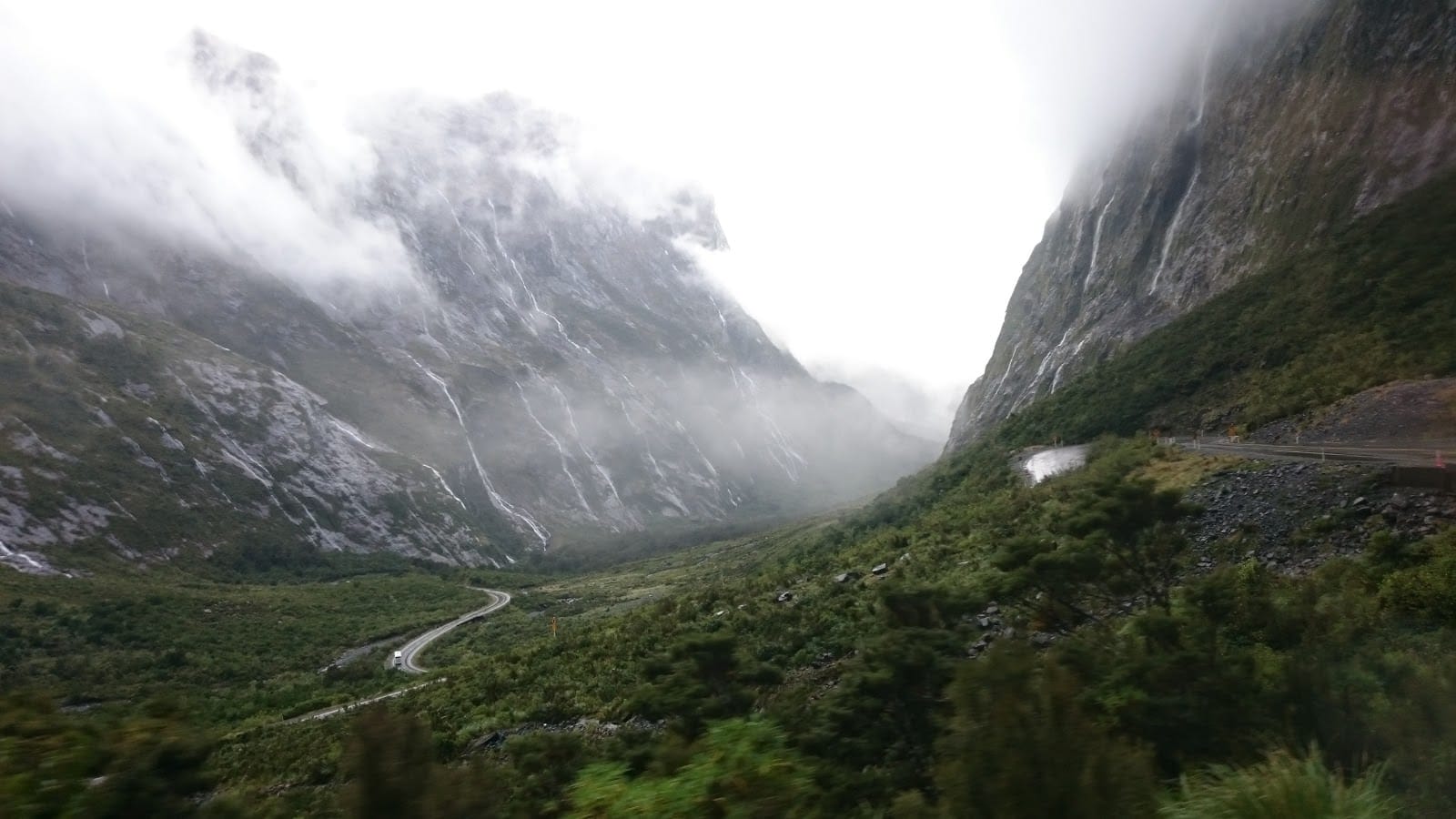 Milford Sound is fairly remote. The closest large towns are Queenstown and Invercargill, which are both about 300 kilometers away by road. Of the two, Queenstown is the most traveler friendly. It’s known as the adventure capital of the world and is a great place to set up shop as a backpacker, as I did. From there, there are three main ways of getting to Milford Sound: bus, car, and airplane.

By bus is the most popular and cheapest way of getting to Milford Sound unless you’ve already rented or purchased your own vehicle. Typically, the bus company will be able to package your ticket to Milford Sound with your kayak guide and/or boat tour.

If you have your own vehicle, you can choose to break the trip from Queenstown to Milford Sound into two days, by staying in Te Anau on the way. Either Way, make sure that you’re prepared for a long road trip since there are no major highways that lead to Milford Sound–expect one-lane roads for the majority of your trip.

Lastly, you can take a short plane ride from Queenstown to Milford Sound, flying over breathtaking glacial capped mountains. By air, they are only about 70 kilometers apart, making it by far the quickest way for you to get to Milford Sound, but also the most expensive. 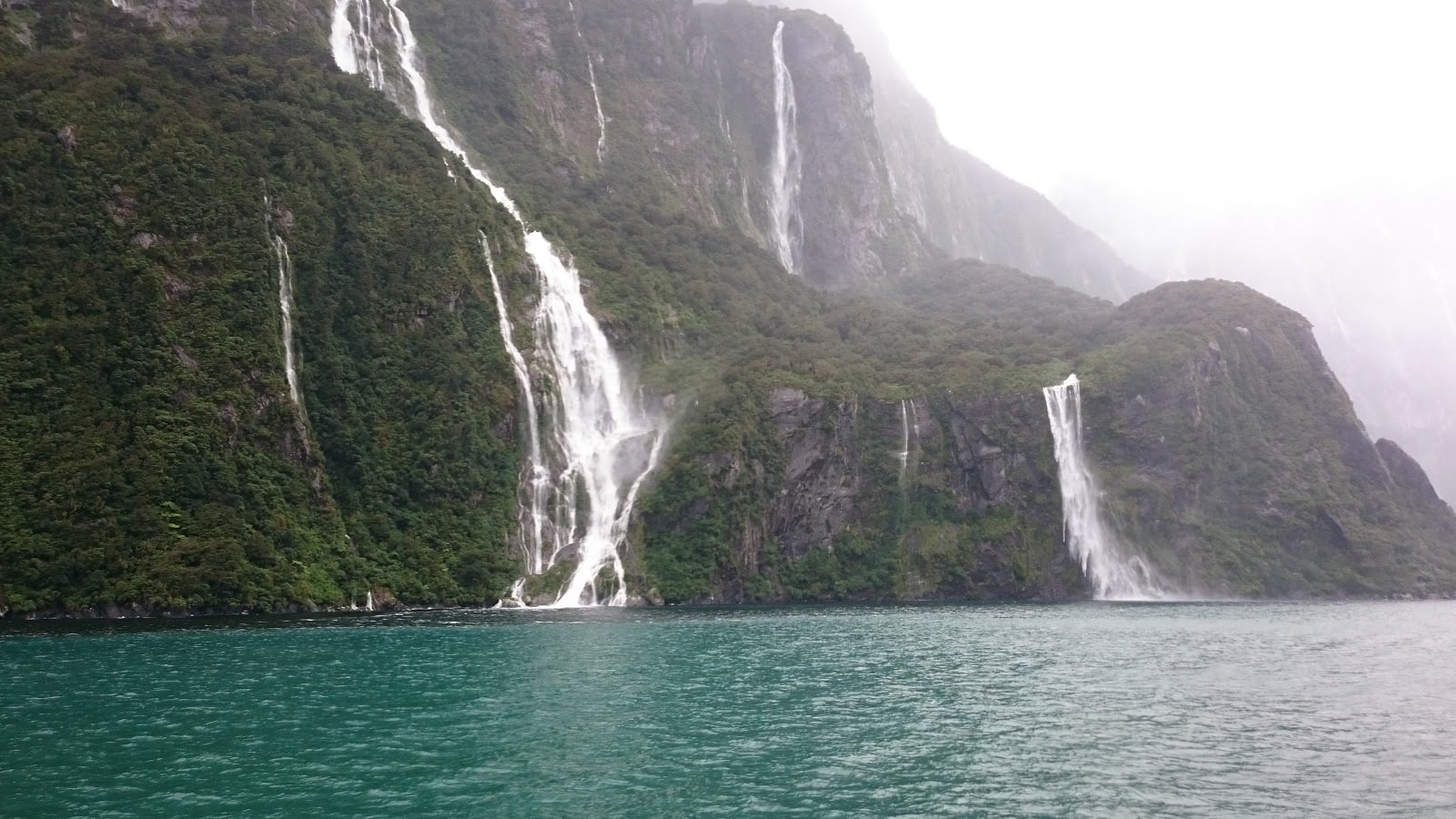 The most renowned feature of Milford Sound is its waterfalls. It has only two permanent waterfalls, Lady Bowen and Stirling Falls. However, in heavy rain, there will be hundreds of waterfalls cascading down Milford Sound’s mountains. 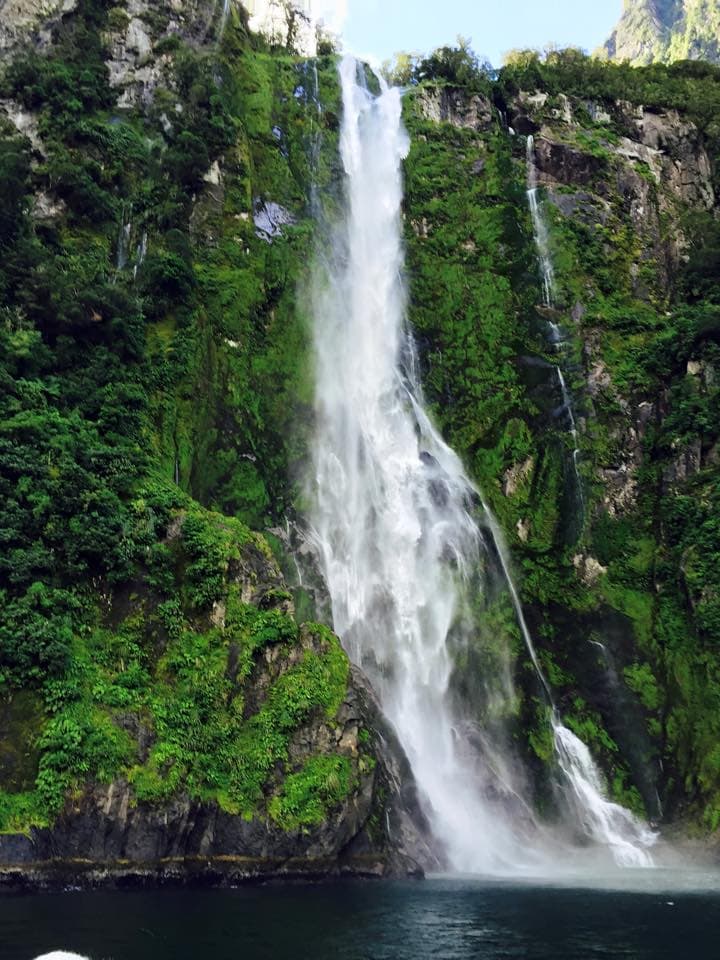 Both the kayaking and boat tours take you right up next to several of the Milford Sound waterfalls. So close that your boat’s guide will be able to jokingly refer to the mist coming from the waterfall as a “glacial facial.” 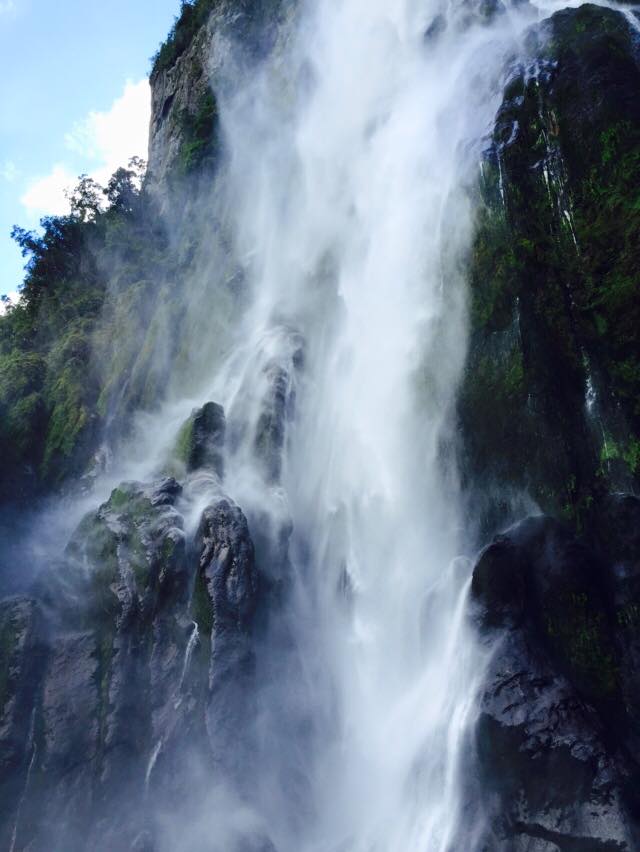 As you can see from the photos, the hundreds picturesque waterfalls in Milford Sound are unlike anything you can see elsewhere in the world–many of which are over 1,000 meters tall.

Milford Sound leads to the Tasman Sea, the large body of water connecting Australia and New Zealand that makes up a portion of the South Pacific Ocean. In order to get to where the Tasman Sea meets Milford Sound, you need to take a boat down the 15 km fjord. This is a trip that’s well worth is it since the opening created by the ending of the surrounding Milford Sound mountains provides an endless landscape full of wonder and awe. 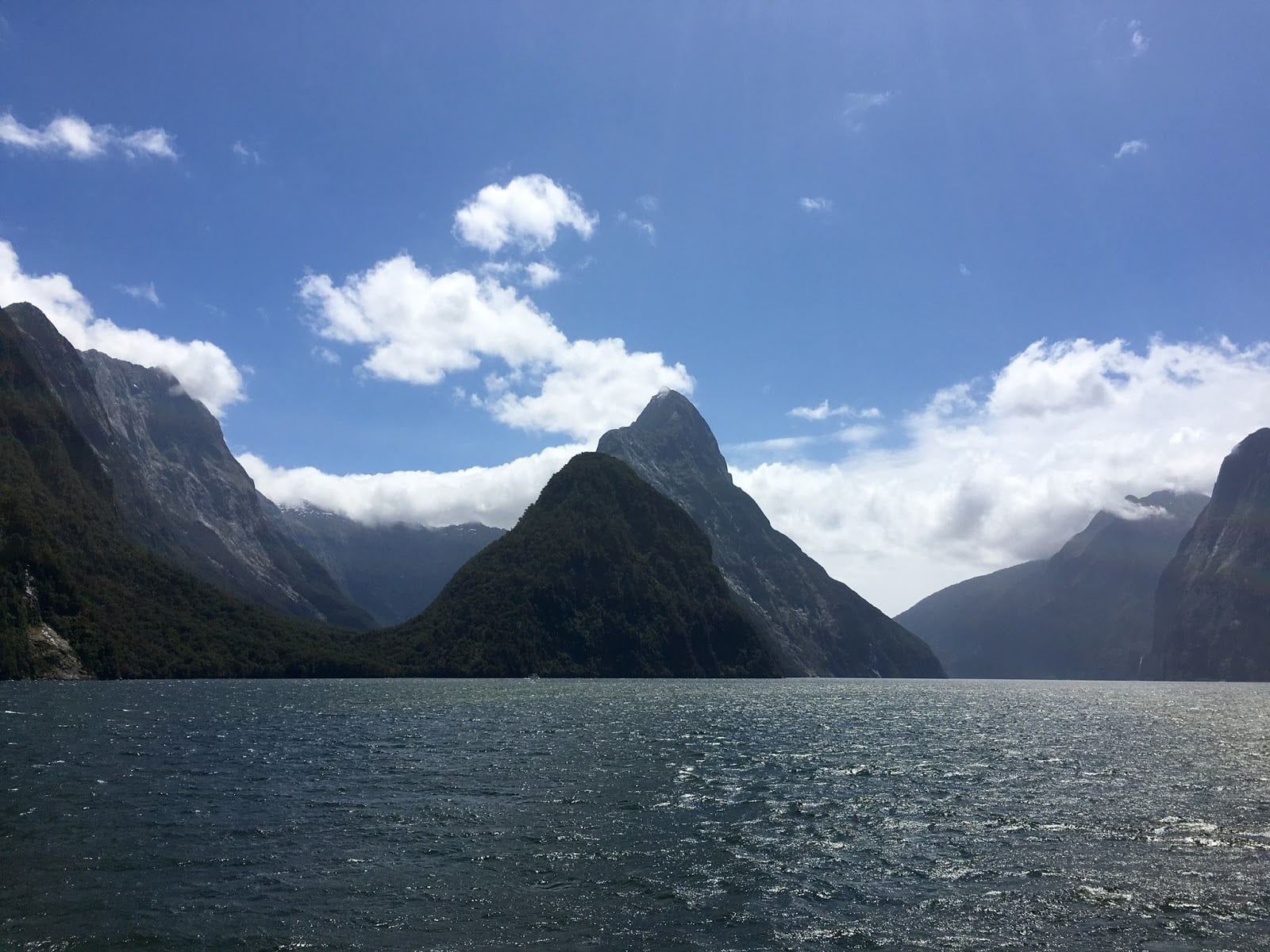 The entirety of Milford Sound is surrounded by sheer rock faces, many of which are over 1,200 meters tall. The most iconic mountain peak visible from Milford Sound is Mitre Peak, which towers above the rest at 1,690 meters. 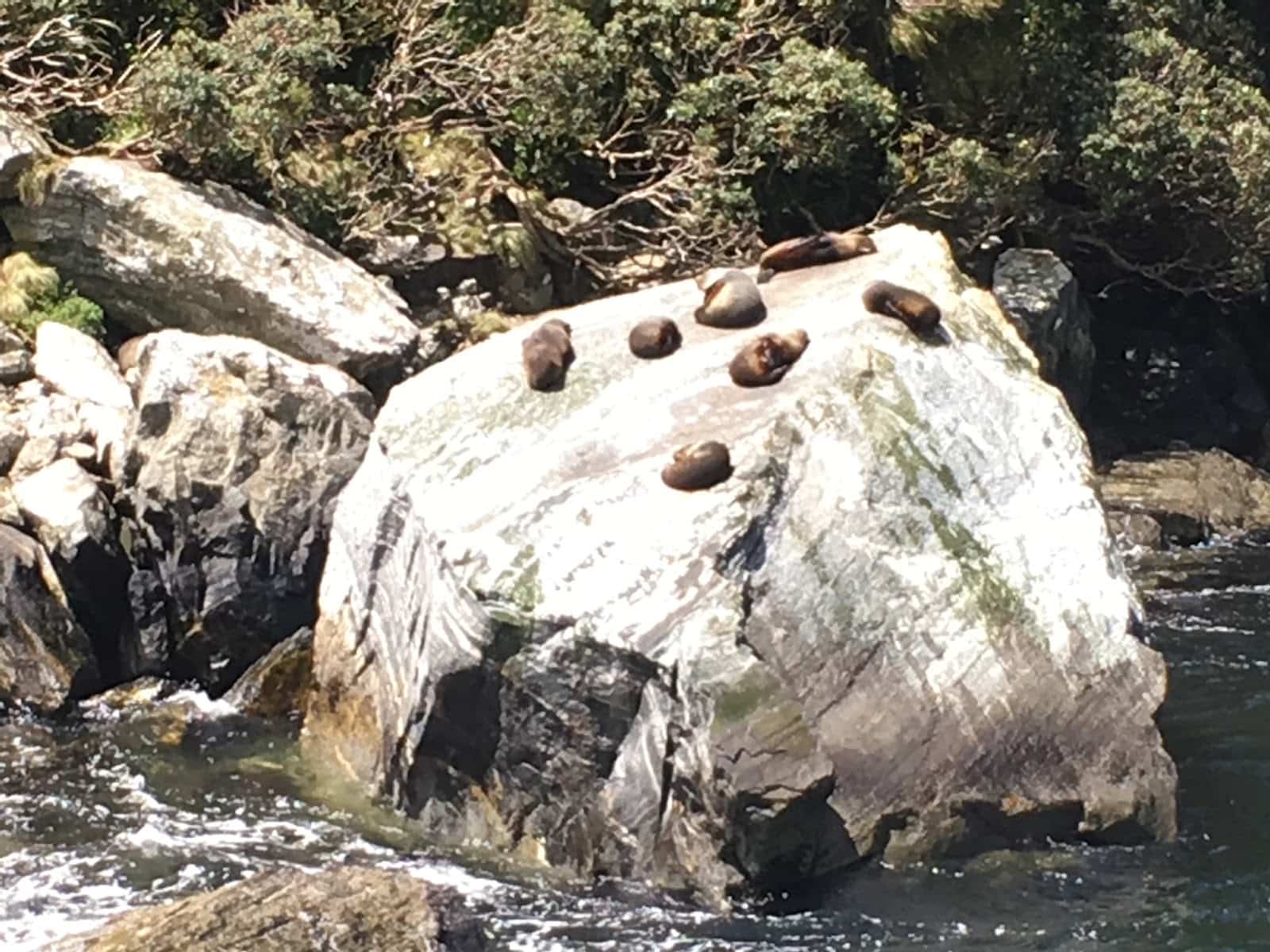 Milford Sound provides a unique environment for living creatures, as it consists of both freshwater and saltwater–the top few meters are freshwater because of the frequent rainfall the fjord receives.

The most popular and easiest animals to see are the fur seals. Year round, they can be seen basking in the sun on fur rock. In the 1800s, these seals were hunted for their blubber to the point of near extinction by European trappers and settlers. Luckily, the fur seals have made a great comeback and can now be seen thriving in Milford Sound. 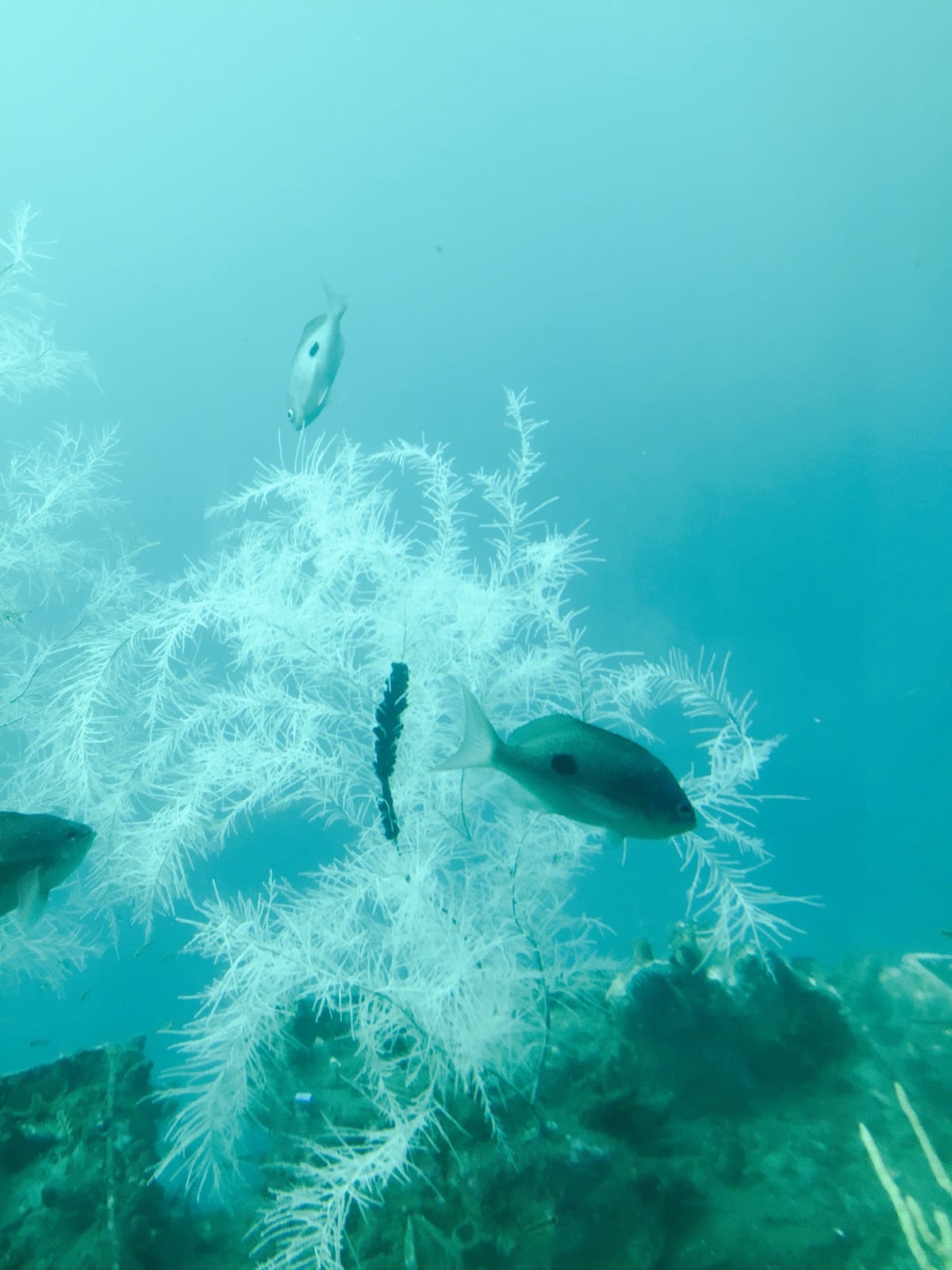 Perhaps the rarest living species that can be seen at Milford Sound is the black coral, which is typically found at depths that are too deep for divers to reach. However, due to the thick top layer of light reducing fresh water, the black coral is able to thrive in salt water at depths as shallow as 10 meters below the surface. The black coral is actually more of a whitish color with a black skeleton, and is a highlight of Milford Sound’s underwater observatory.

Other popular animal attractions at Milford Sound are the Fiordland crested penguins, which can be seen during their breeding season from July to November, and bottlenose dolphins. Southern Right Whales are also occasionally seen along the shores of Milford Sound.

What to do in Milford Sound? 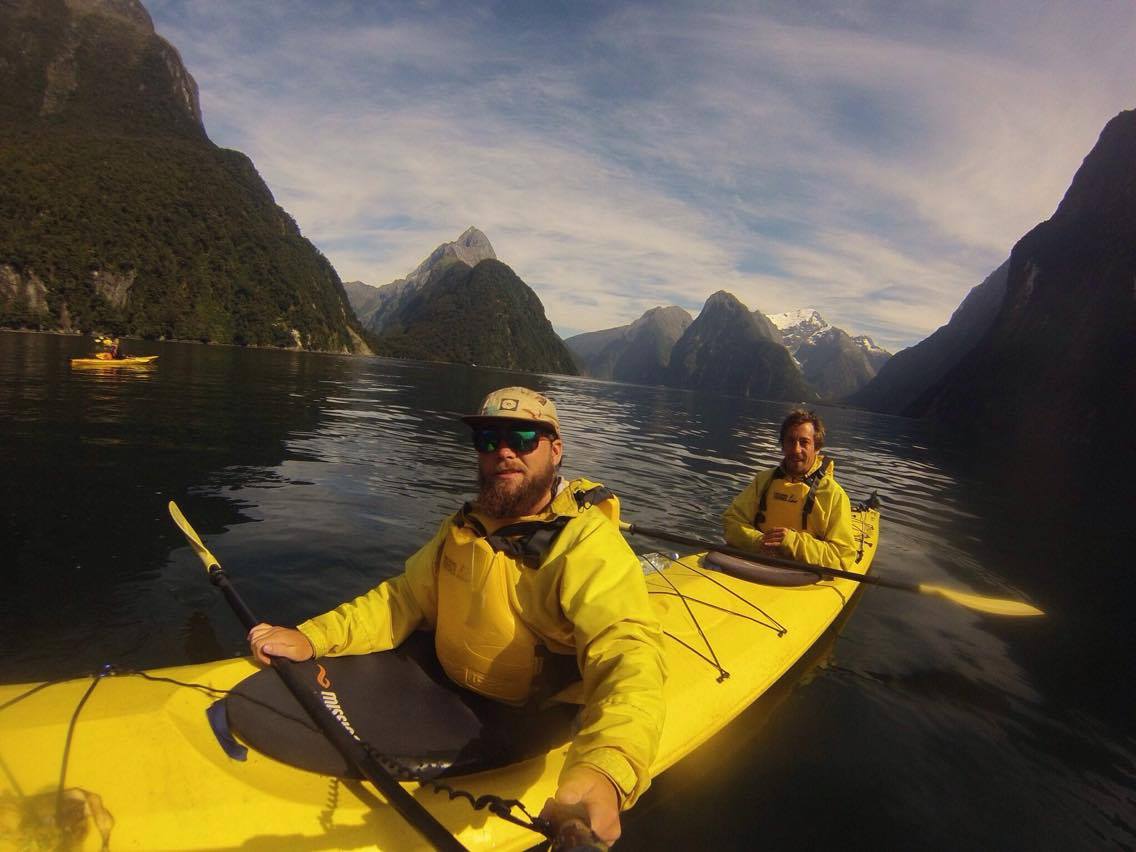 As one of the top destinations for a kayaking adventure, at Milford Sound you’ll be happy to pay the pricey kayak rental fees. No experience is required to go on a guided kayaking trip throughout Milford Sound, which is one of the best ways for you to experience the sights and sounds of the fjord. Your kayak will be very easy as you paddle through Milford Sound’s crystal clear waters, while you focus on the ancient rainforest that surrounds you.

A luxurious guided boat tour is easily the most popular and leisurely way of seeing Milford Sound. On the boat, you have the option of staying warm and dry inside of the cabin, or you can venture onto the deck where you can literally get splashed by the fjord’s magnificent waterfalls.

Even though Milford Sound is only 15 kilometers long, the cruises and guided boat tours usually last over two hours. Each trip is equipped with a very knowledgeable guide, who is there to provide you with with insights regarding to Milford Sound’s beauty and secrets. Free coffee, as well as other purchasable beverages, are frequently available on the boat tour. And don’t worry, you won’t spill your drink due to choppy ride because the waters of Milford Sound are consistently calm. 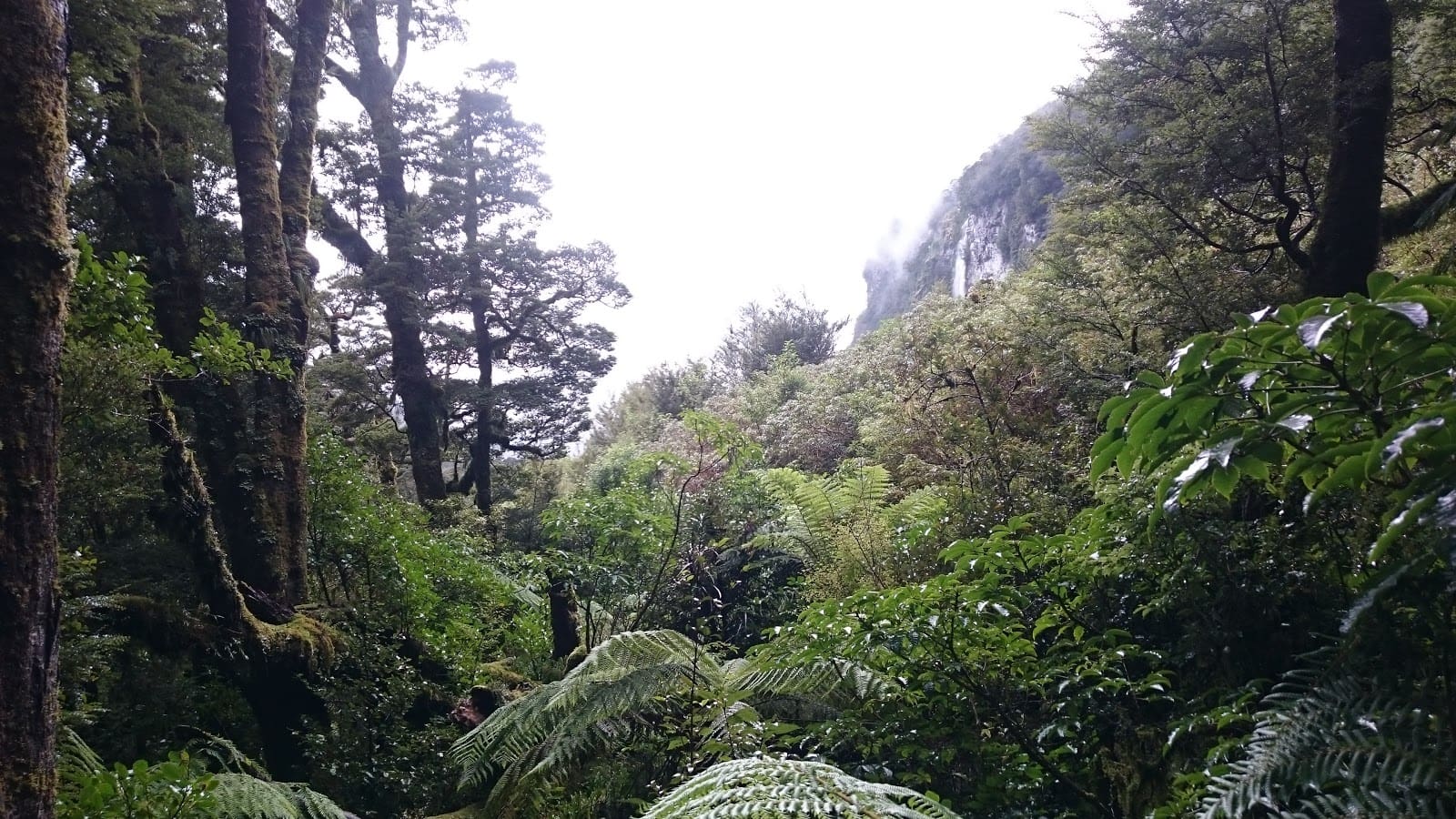 New Zealand’s most famous hike is the Milford Track, which is a 53 kilometer trail starting in Te Anau and ending at Milford Sound. The four-day trek takes you across suspension bridges, board walks, and a mountain pass, while you see some of the prettiest lakes, mountain peaks, and deep valleys that Mother Nature has to offer.

The Milford Track can be done with a guide or on your own. If you decide to do travel the track on your own, be sure to get a spot at one of the huts well in advance, as they book up fast and camping along the track is illegal.

Can you Stay at Milford Sound?

The Milford Sound Lodge is the only place that provides accommodation in Milford Sound. The lodge provides rooms for both frugal backpackers and travelers with an endless budget.

The premier rooms at the lodge are its Premium Riverside Chalets, which are partially translucent structures situated alongside a river that flows into Milford Sound. The chalets provide incredible, all-encompassing views of the beautiful surrounding area. The cheaper rooms are the twin and double rooms, the rain forest campervan park, and the 4-11 bed dormitory-style rooms.

However, even the dorm style rooms still cost $35 dollars per bed for adults, which is pretty expensive for New Zealand. So unless you have a lot of money to spend or plan to do every activity Milford Sound has to offer, I would recommend only spending a day there. 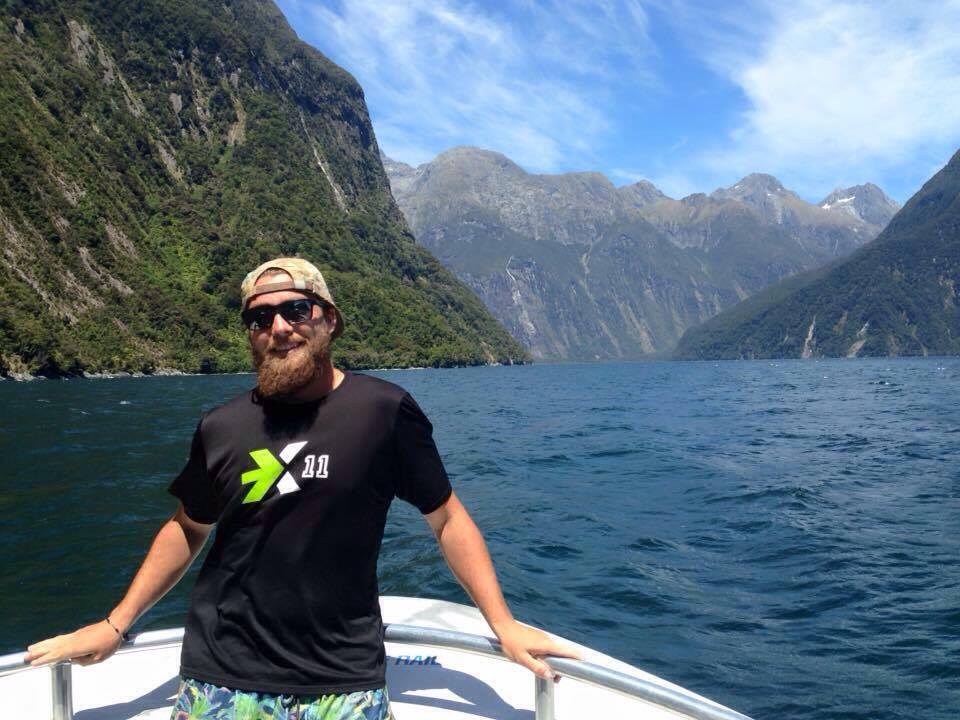 When planning a trip to Milford Sound you’re going to want to pack multiple clothing options. The weather there can change frequently and it actually rains there 182 days a year, so pack a poncho and other water-resistant gear, since you’re likely to get caught in the rain. But also be prepared to dress as my friend Ryan did in the photo above, in shorts and a t-shirt. 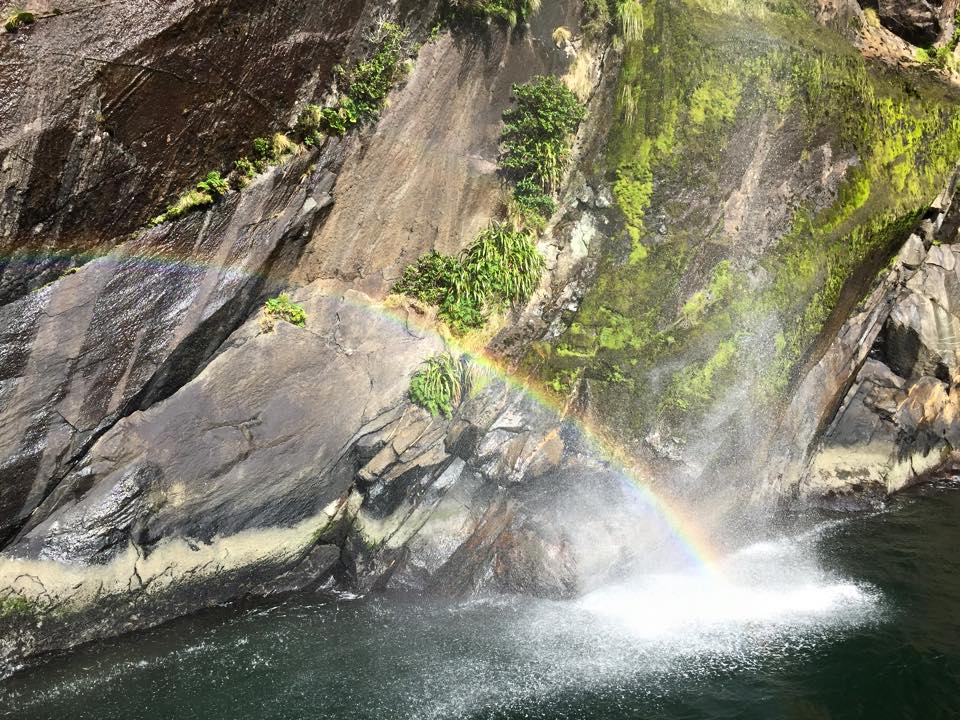 By now I am sure that it’s clear that when you visit New Zealand, Milford Sound is a must see. However, when compared to a lot of other backpacker destinations, it’s pretty expensive, but don’t let that deter you. There are plenty of extra ways to make money while you travel, or you can always apply for a New Zealand working holiday visa, which will allow you to work and travel in New Zealand for up to one year.