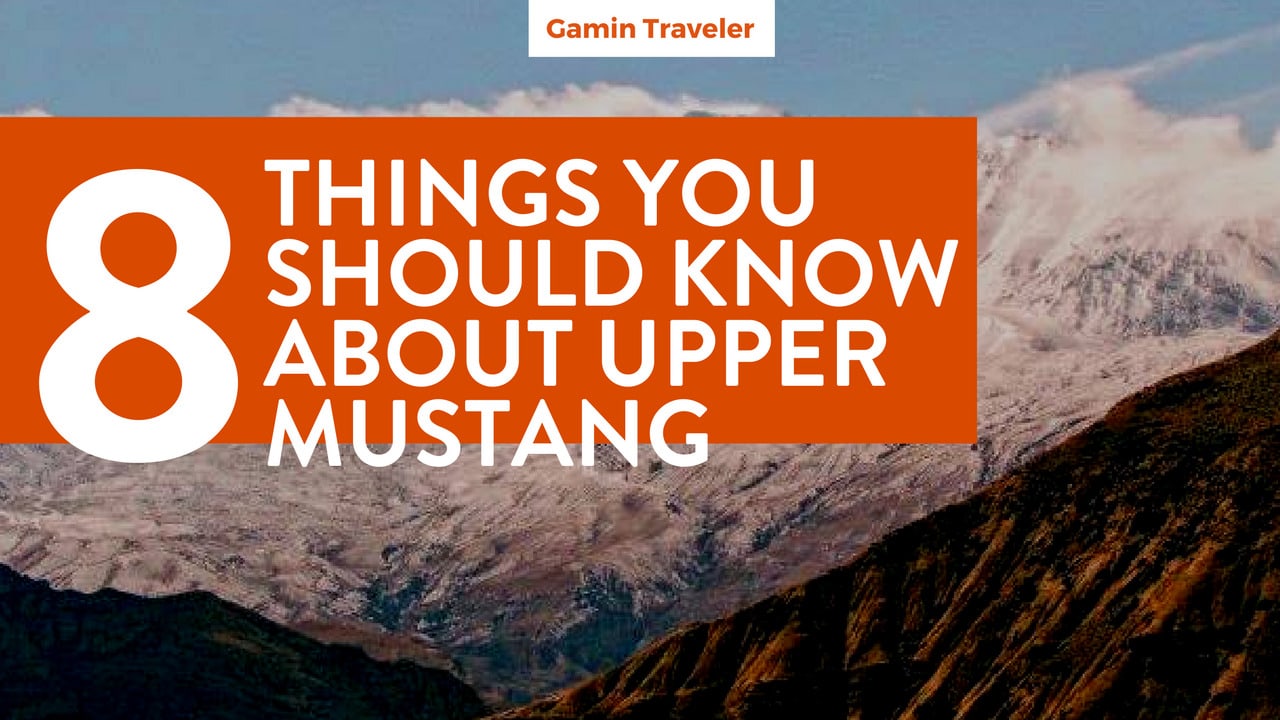 Upper Mustang officially starts at Kagbeni Village, which is a short 2-3 hour walk from Jomson.  Kagbeni itself is worth exploring.  Here you can head East over a small pass and into the restricted areas of Upper Mustang, where you hiking to Uppermustang begins.

Or head towards Muktinath and enter Upper Mustang. You will find a land unlike other parts of Nepal.  Its altitude means the land is dry and rocky, with very few trees.  Locals do have their own kitchen gardens and fields on which they grow some of their daily needs.

Below are the top eight things you should know about Upper Mustang.  But there is much more to this stark and fascinating land!

Mustang is part of the old Trans-Himalaya salt trading route where salt, and other goods, were traded from Tibet to India. Being the shortest route from Tibet to India, the trail followed the windy banks of the Kali Gandaki River and brought much needed income to the area as well.  As Upper Mustang is in the rain shadow of the Annapurna and Dhaulagiri Himalaya ranges, water sources are very scares and life revolves around animal husbandry and trade with Tibet.

Muktinath is a holy pilgrimage site for both Hindu and Buddhist devotees, and is the starting point of the salt trading route. At an elevation of approximate 3,700 metres above sea level, Muktinath is seen as the holiest place on earth. According to Hindu mythology, the universe is a mix of five elements, and all the five elements exist in Muktinath.

The main temple is for Lord Vishnu, which is the major attraction of Muktinath. For Buddhists there is Samba Gompa. In addition, there is a continuous flame inside Jwalamai Temple. North of Muktinath, at Damodar Kunda, ammonites can be found. 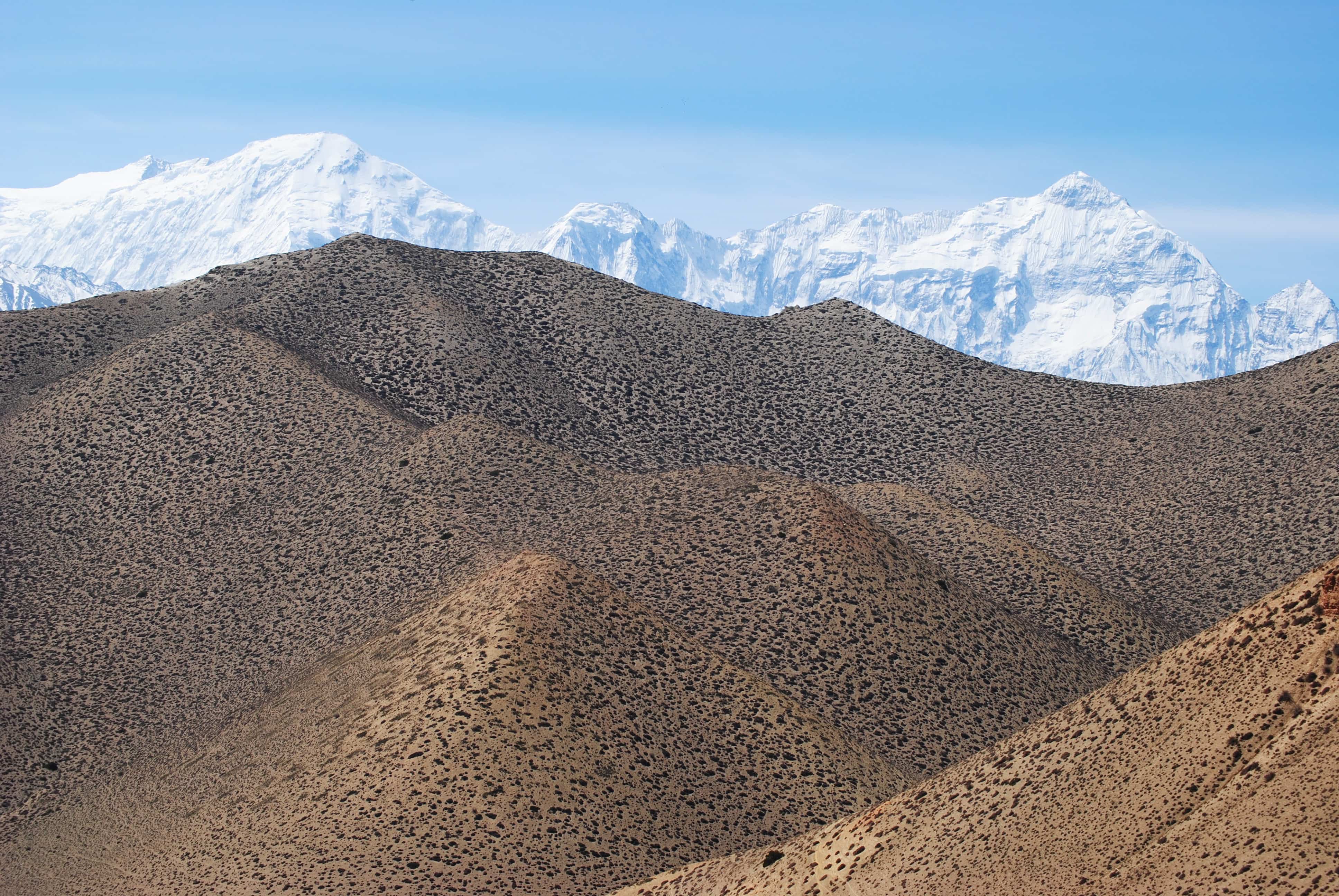 Lo Manthang, the last large settlement in the north of Mustang, is the capital of Upper Mustang.  It is often known as the ‘city of wall’ and ‘city of clay’. In the past, to protect the Kingdom of Lo, a huge wall was built around the village, and everyone was required to build their houses within this wall.  Lo Manthang was divided into four quarters, with each quarter guarded by and individual deity.

Now, as the population grows, there is not enough space inside the wall and you can find several new houses outside the wall.  Today, a big resort is also under construction under the supervision of former crown prince of Lo Manthang.

Upper Mustang is often addressed as “mini Tibet”.  Monasteries are an important part of daily life in Upper Mustang, and there are several of them – each village has their own monastery.  In Lo Manthang itself, there are three old monasteries, with the oldest one, named The God House, being 700 years old.

Naturally, there are supernatural stories behind the monasteries. Your hotel in Lo Mangtang will give you a free local guide for the day – an excellent window into local culture – and can also arrange a meeting with the King of Lo Manthang. Actually, with the changing politics of the country, he is no longer viewed by the government as a King but to the local people, he remains royal.

There are many caves in Upper Mustang. Some of them are well explored while some are still unknown to the outside world. Chhoser Cave is outstanding, with fifty plus individual rooms and four individual levels, all of which are connected by a ladder.

In the past people lived in the cave, rather than in villages, which were built in more recent history. You have to buy a ticket to enter the cave and a local guide will accompany you on your cave tour.

A team from National Geographic, lead by Cory Richard, explored the sky caves of Upper Mustang.

Tiji festival is the most important festival for people of Lo. This festival celebrates the  myth of the fight in between the deity Junu and his father.  It is celebrated in the courtyard of Lo Manthang  Palace, where the fight is recreated to the delight of locals and visitors alike.

After Tiji, Yartung,  or Horse Race,  is the next major festival. This is celebrated locally in different villages. Local people adorn themselves in their traditional costumes and jewellery to participate in this festival where there are separate horse races for men and women. You can check the date for upcoming festivals between 2016 and 2020 here. 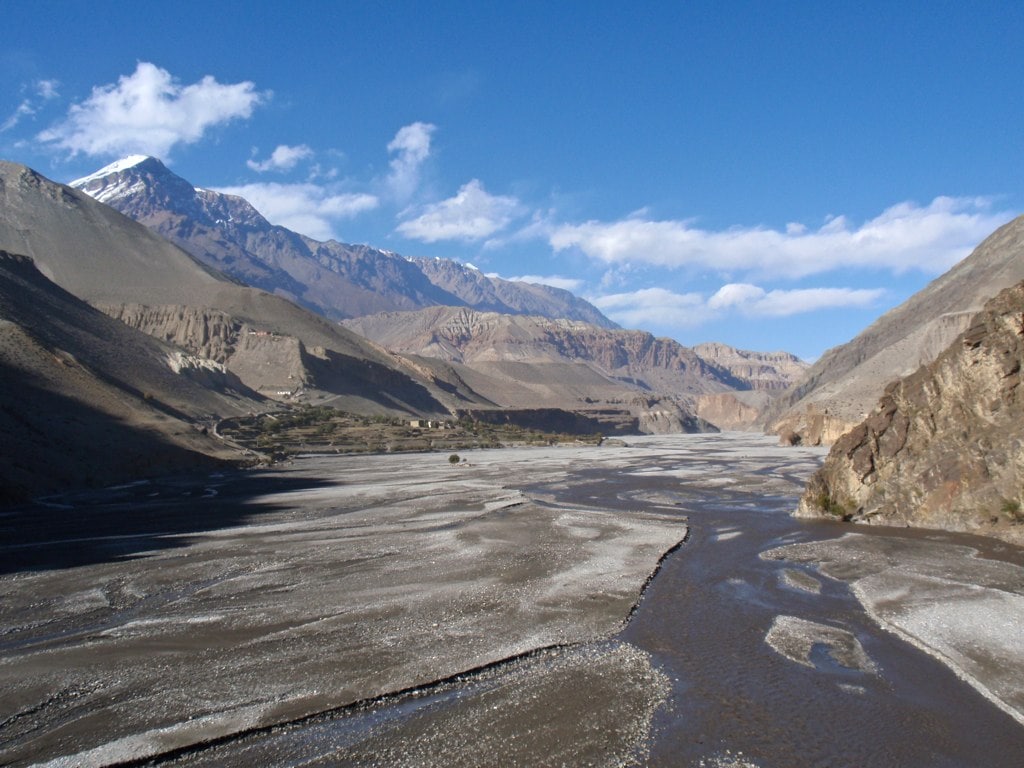 Ame Pal founded Kingdom of Lo Manthang in 1380 and it kept its hereditary rule until Nepal become a Republic in 2008. Jigme Dorje Palbar Bista, the 25th King, was the last King of Lo, losing his title in 2008.

However, every afternoon trekkers can visit the King in his palace. Do buy a blessing scarf to take with you.  You can also get your picture taken with the King!

The epicenter of the April 2015 earthquake was in Gorkha, with the energy heading east to impact heavily on  Langtang, Helambu, Melamchi and Gaurishankar. Mustang is to the northwest of Gorkha so was unaffected by the earthquake.

Right after the earthquake, there was a multi-stage trail running race in Upper Mustang. You can read the trip report here.