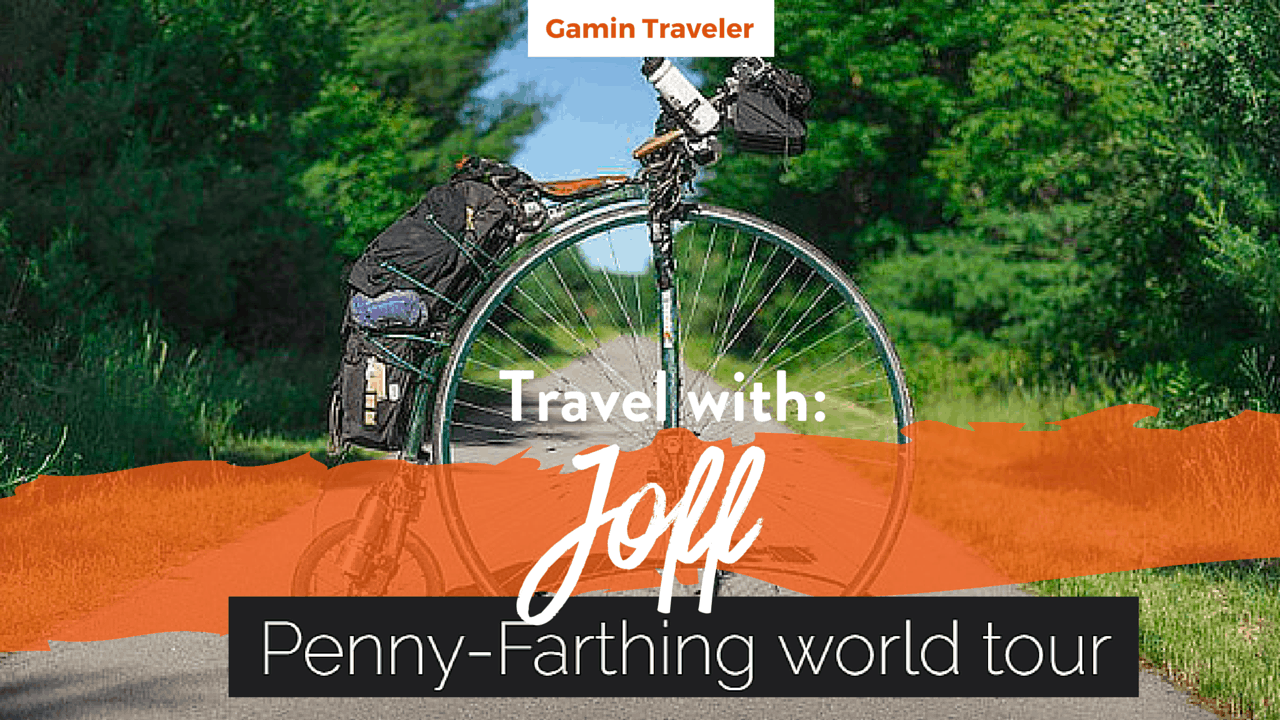 Today we are traveling with Joff from Penny-Farthing

My name is Joff Summerfield, I’m from London in the UK, and my blog is about cycling around the world on a Penny Farthing bicycle.

I’m a bicycle tourist/adventurer. Mostly I have travelled on the Penny, but I did drive a 1958 Morris Minor 6000 miles around the USA a few years ago.
I will probably always travel by Penny Farthing, the bike opens so many doors for you while you are on the road.

What’s inside your backpack or panniers? What is that one thing that you ALWAYS have to carry

I have to travel very light, as I simply don’t have the space to carry much. Compared to a regular bicycle tourist who has 4 panniers, 2 small on the front and 2 large on the back, I can only carry the two small front Panniers, but behind the seat.

The most important lightweight thing to carry, that you should never leave home without, is free, works in any country and cuts across any foreign language, is simply a smile! If you travel with that, you will go far… 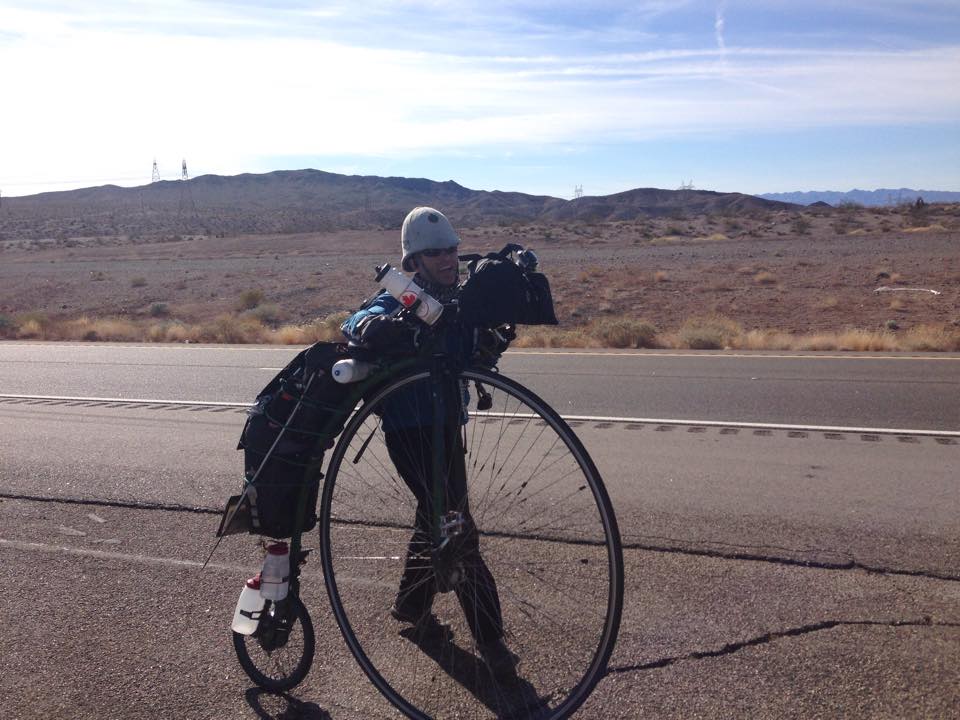 Which country is the easiest for starting to travel by bicycle? Why?

Your home country is by far the easiest. The language is the same, you understand how everything works, and you have the same currency.

The other thing is this, we can all be fairly cynical at times about our home nation, but if you get on a bike ride it from end to end, you will come away with a much better feeling of the people and landscape.

Which country is the hardest for traveling by bicycle? Why?

For me Tibet was the hardest to travel across. It was also my favourite country so far.
The reason for this is that to get in you need a travel permit, but these the Chinese authorities won’t give to independent travellers. Your only option is to get to the border and sneak across, this is what I did with great success. The road to Lhasa then has five of six military checkpoints which again you have to sneak through. This is the difficulty with officialdom, but then you have to cross the Himalayas which on a Penny was extremely challenging. Crossing 15,000 ft passes on dirt roads entailed a fare bit of walking, but the scenery, and Tibetan people made it all worth while.

You were cycling South America. How many kilometers per day? How many hours in the bicycle? your budget?

I try and ride about 65-70 km a day, this I can do day after day, depending on the terrain and altitude. I do like to take plenty of stops, for resting, taking pictures and meeting the locals.
On my first RTW trip my budget was £5 a day, on my recent Americas adventure it was better at £10 a day. 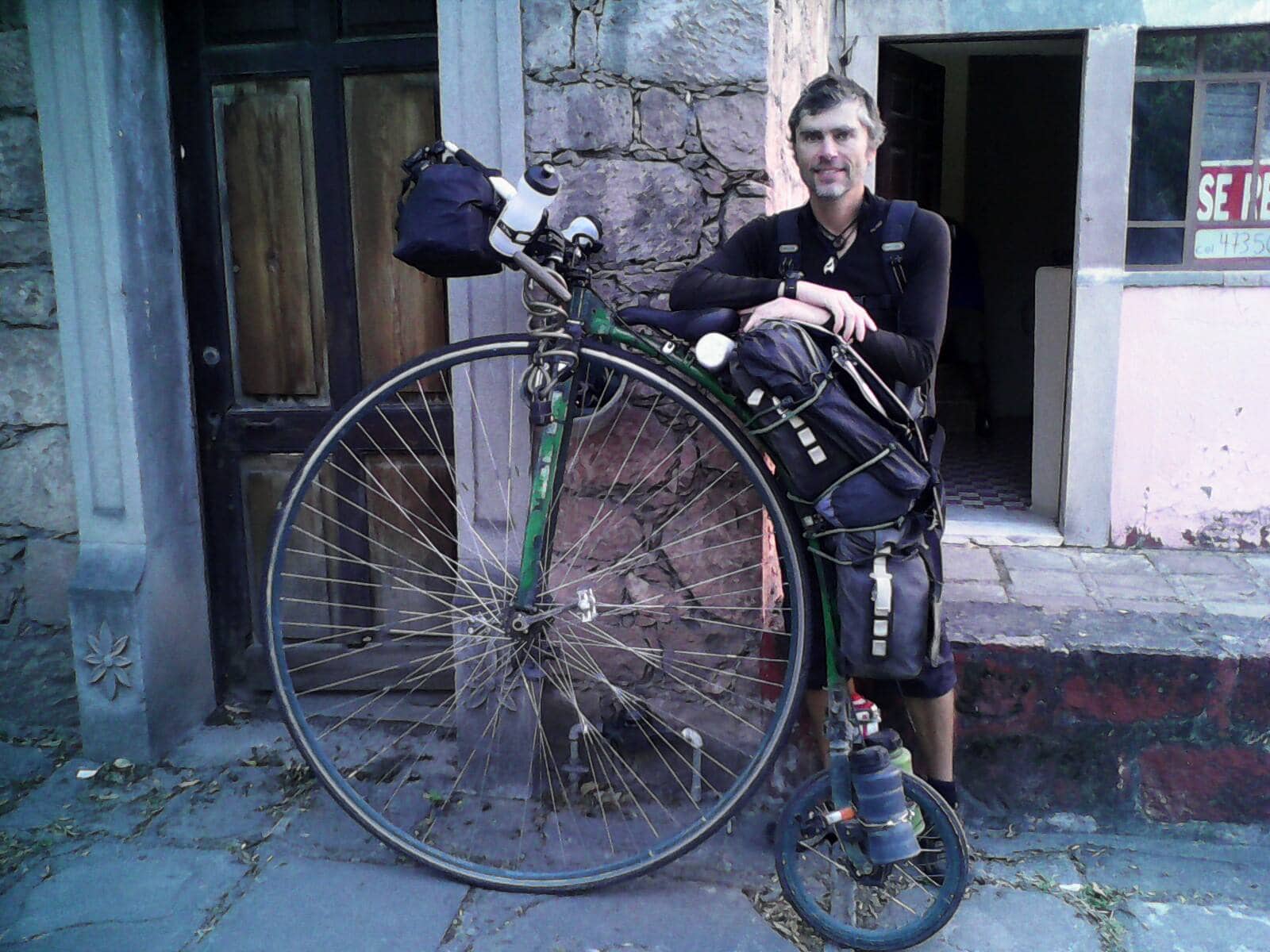 Tell us about the way and the roads in South America?

My route had me crossing the US to start, so that when I hit the Rockies I would turn left and head south. This went perfectly and took me all the way down to Mexico. Here I rode down the Baja peninsula which is mainly desert with more Cactus plants than I ever believed possible. Free camping was simple here with endless place to pull off. My one advantage of having solid rubber tyres was that I didn’t get any punctures from the Cactus thorns that the other cyclists got.

Travelling alone is something that just happened and has never been a must have option.
Years ago I tried to organise a group of friend to go on a bike ride for a few days. Lots of keen people at first but as the date grew closer I felt like I was herding cats. In the end I went on my own and had an absolute blast.

Since then I have just headed off on my own because as I discovered its hard enough to organise myself let alone others. On the road you do of course run into other cyclists, and I get huge pleasure while riding with them from days to weeks at a time. The only problem that I have is that I can’t really keep up. Having no gears means that my pace is far slower than others while touring, but normally we all find a good balance of pace.

Overall probably the Eastern European countries, notably Hungary, Serbia. I like a pint of beer, but here if you were to stop for every shot of Vodka offered you wouldn’t be getting very far on your travels! 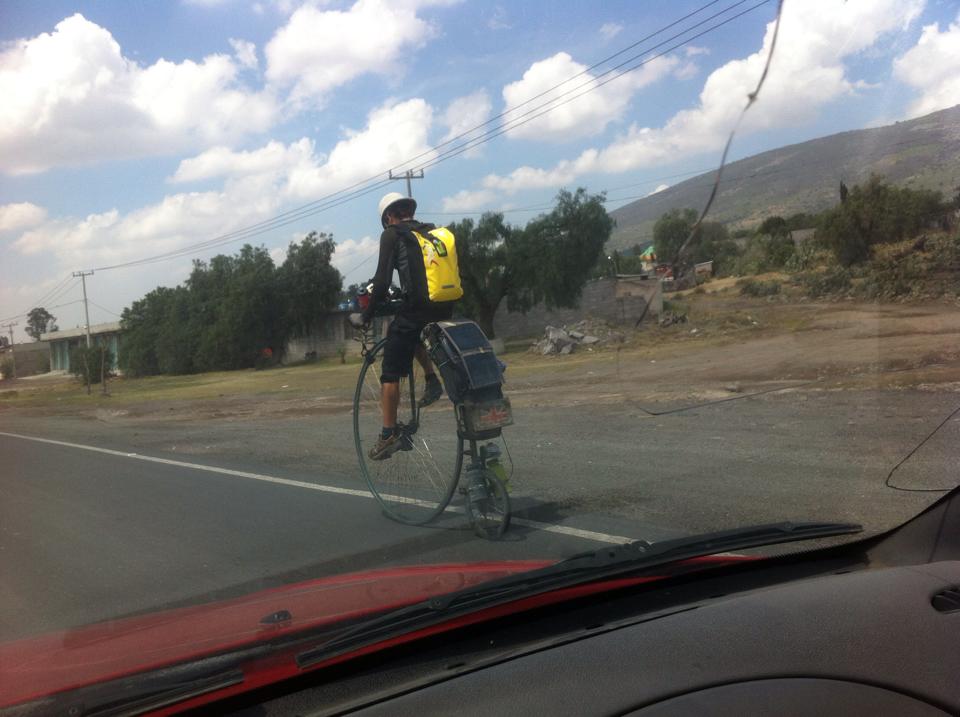 At the moment having just returned I’m writing a book about my adventures, and building Penny farthings.

What’s the big reason why you are traveling? Why by bicycle?

To travel is to see and experience the world through your own eyes. Otherwise you learn of the world from the news and its never good. Go and look for yourself and you’ll soon realise that 99.9 % of the people out there are lovely and kind.

Why by bicycle? It’s the ultimate leveller, people both rich and poor ride bikes, nobody pre judges you when your cycling, as they would I’m sure if you turned up in an expensive jeep.

My longest journey was a 2 1/2 year ride around the world. 23 countries including Europe, Turkey, China, Tibet, Nepal, India, SE Asia, Australia, NZ, USA and Canada.
This trip was to see the world and its peoples through my own eyes. 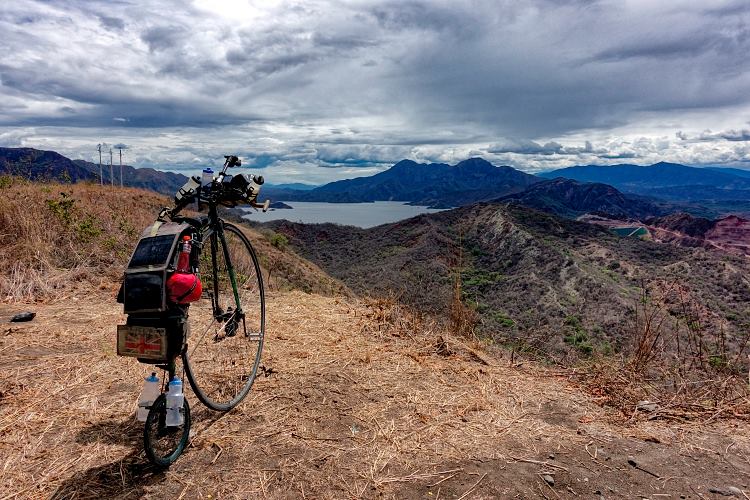 Perhaps it has to be my first. This was a five day ride up to Amsterdam on a pre-war BSA parachute bike. This was the ride that started out as a way to have a cheap holiday, but turned into an epiphany for my future adventures.

I’m not a big foody, but Marmite is the food of the gods. When my supply’s run out on the longer journeys, it is a very sad day. 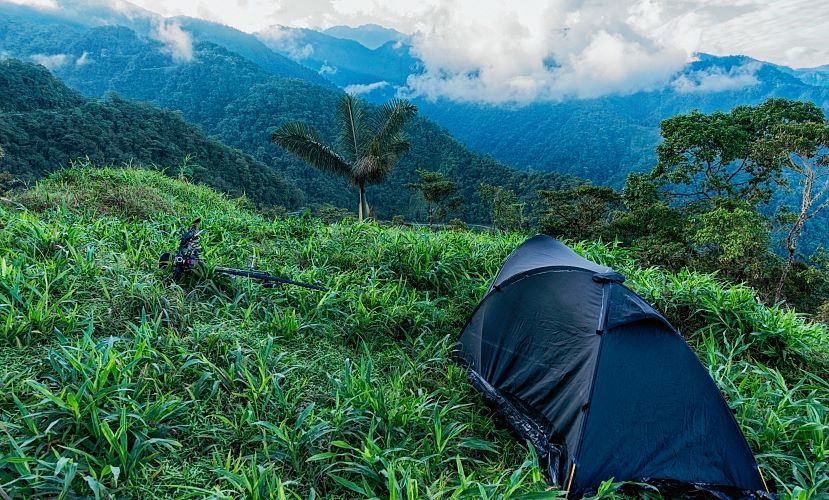 Every day can be challenging but that only makes you stronger and able to dig deeper inside yourself.

Bad moments, yes, while cycling through Ecuador I was tied up and robbed at gunpoint while camping. Nobody saw me leave the road, but the scumbags came looking for me, I guess they must have seen my ride through the previous village. I went through the whole head covered and gun to the temple execution scenario, not a lot of fun. They took everything bar the bike, tent, sleeping bag and the clothes I was wearing.

The balance to this is that the lovely people of Ecuador were wonderful, helping me out in endless ways with their kindness and generosity. I still firmly believe that 99.9% of the people in the world are lovely, just on this occasion I met the .1%.

What has been you favorite destination on all the trips you’ve done?

Tibet. Riding up to Everest base camp on a Penny Farthing was pretty special.

India was tough to camp in as there were people everywhere, but rooms are cheap. You do get used to the odd rat or two running across you in the night and the general filth.

When are you planning to finish this current trip?

After being robbed replacing everything that was stolen would have finished off my budget, so I chose to come home and live to fight another day. 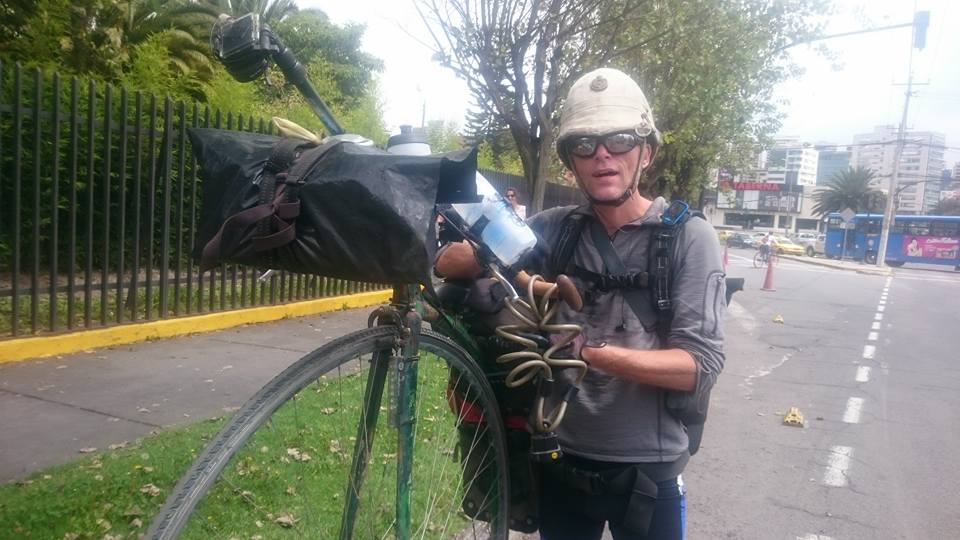 Its easy to find love while you are traveling?

Nope, I’m always hoping to come across a lovely girl with the same passion as me, and hopefully heading in the same direction, hasn’t happened yet!

Great story Joff, thanks for your time!

It was very sad to hear about his story of getting robbed in Ecuador! Good to hear he was safe. He had to go back to his country in the middle of his trip. We hope that John will hit the road soon with his bicycle. We definitely look forward to hearing more of his stories!

Have you ever heard about someone traveling like Joff? Traveling the world in this way is amazing – you can do sport, travel in a low budget and enjoy the nature – all at the same time! Check his website to know more about him. Feel free to follow him by Facebook and Youtube for more updates.

If you want to read more bicycle stories, read Patrick Martin Schroeder‘s interview. He has traveled to 130+ countries. We also had an interview with Dave, one who is still traveling around the world by bicycle.

You can check my story how I traveled by bicycle with almost no money from Spain to Norway and going down to Lapland until Helsinki. A 5 months trip and 10 000 kilometers.

Stay doing what you love dear friend. x Til the next travel story.

I thought Pennys were quite difficult to ride... How on earth did he take his up the Himalayas? Such an interesting story.

Thanks Cassie! It´s an amazing story and very inspiring :)

Interesting article. You don't usually find love while you travel and Joff's right, its because all else is heading the same direction where he is.. and if you ever find love when you travel it doesn't normally last that long to even call it love. :)

Thanks Karen, many people found love on the road :) You never know ...

Thanks John, we are glad that you enjoyed reading the post :)