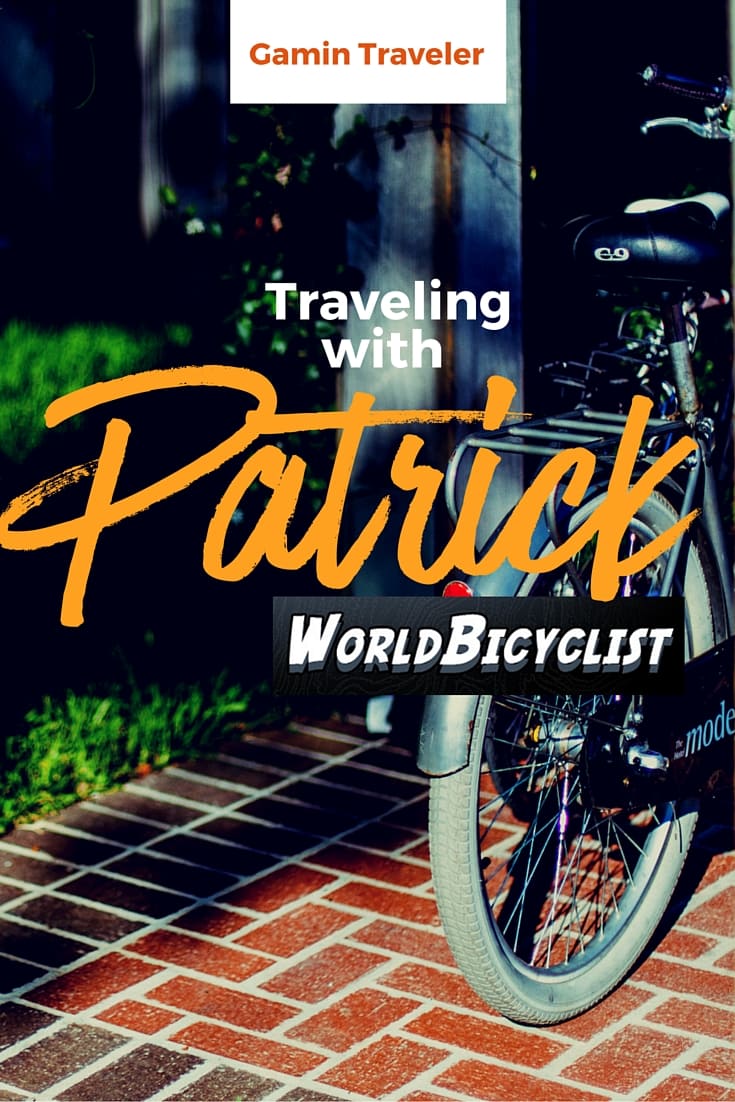 Today we are traveling with Patrick Martin Schroeder

My name is Patrick Martin Schroeder, I’m a German cyclist and adventurer who started in 2007 to see the world. Worldbicyclist is my little corner of the web, and it shows my progress on the trip to visit every country in the world, and gives background info on the gear, budget, etc I used. I’ve been traveling to 130+ countries around the world.

Backpacker, Cyclist and Hiker. I like the outdoors, challenges, the independence. And it is cheaper than ordinary tours in buses and hotels.

What’s inside your panniers? What is that one thing that you ALWAYS have to carry?

I always carry a chess board and Kindle ebook reader. Food for the mind is important.

Can you tell us a country for starting (beginners) a bicycle trip?

I would say that South Korea would be a great start. For most people, the culture, people and food will be new and exotic, the country is not overly expensive, yet has an impressive and well-build bicycle infrastructure. You have bike paths everywhere and you can replace any missing parts easily, because most things are produced here or in nearby China/Malaysia.

The 4-river bike trail is about 600km and a good test run for people interested in bike touring.

Can you tell us the hardest (for experts) for cycling? Why?

Any third-world country in Africa or Asia that you don’t speak the language of, or any region with extreme weather, like Sahara in summer or Siberia in winter.

Trust me, I did both.

You are in Middle East right now. Where are you gonna continue your trip? Which route?

I’m in Doha, Qatar right now, the next flight will bring me to Dubai in the UAE for New Years. From there I’ll ride into Oman, before taking a longer break.

Next destinations in the first half of 2016 will be India, Bhutan, Bangladesh, Sri Lanka, the Maldives and hopefully Iraq, Saudi-Arabia and Yemen, although the visa and security issue might make this difficult.

What’s your average of speed per day?How many Kilometers?

My budget is between $10 and $20, depending on the trip and area. At the moment it is slightly higher, because I have a lot of flights to island states or countries with locked land borders.

Speed-wise, it differs a lot. I once did a tour in Scandinavia with a 200km daily average, then again I spend 6 weeks in northern Colombia and only cycled 300km or so in total. when I ride, I never ride less than 100km a day, a point of personal pride/stubbornness, but I dont ride every day.

How did you finance this trip?

I rent out a place in Germany, which allows me to pay my taxes and insurances and leaves about 300€ per month income. I also program a bit on my own game mod, have sponsors that supply me with free equipment, and now and then I do odd jobs, but that is very rare. Most for the experience than the money.

I future I want to write more, either a book or a online project released by chapter, hopefully crowdfunded.

Can you tell us the recent robbery story? How do you feel after that?

Long story short: I did camp very early and set up my tent in broad daylight, which resulted in the wrong people knowing where I was. Some time early at night a soldier/guy in camo-gear with gun came to me, shook my tent, went through my stuff, grabbed money and electronics. When I told him no, he loaded his gun and aimed it at me, then continued.

I was rather heartbroken that my harddrive with a lot of pictures was gone, but otherwise I’m not affected much by it. Nothing critical is gone, I relocated my camp site and slept at another beach, 20km down the coast.

I’m still an optimist and think that most people will help you. Because this was one negative experience out of hundred good ones.

About 2/3 of my tours I travelled solo. Mostly because I was going by bike, which means it is hard to find a fellow cyclist that is going the same route and the same time at the same speed.

I happen to head into relatively obscure places, ride fast on a light bike. That means that company is sparse.

Mostly in the poorer African countries. Sudan especially stands out.

There are lots of stories I could tell, but the people always help you out if you need it. Even in first world countries, although it is more rare, because you are less likely to need help there. But after breaching the barrier of personal space and polite disinterest that rules in the West, you will find good friends even there.

I read, play computer games, sort through my travel photos, write, plan the next trip, talk with sponsors.

My entire adult life has been on tour or preparing for a tour.

What’s the big reason why you are traveling?

I will let you know as soon as I figure it out. 😀 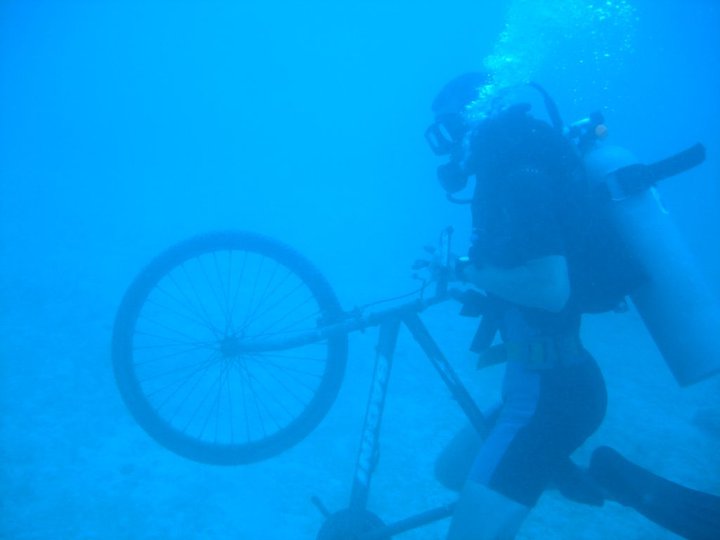 Patrick diving with his bicycle.

I try to go back to Germany 2-3 months per year to plan and prepare the next leg of my trip to every country in the world, but the biggest section was Argentina to Canada, which took 18 months.

I went through every country in South- Central- and North-America on that tour.

Budget was the same as always, around $15 per day.

Why I did it is easy to answer: I wanted to visit all the countries there, cycle the Pan-American Highway, boat the Amazon, visit ancient Inca, Maya and Aztec ruins, and and and. It was great, I especially fell in love with Patagonia.

My favorite one was the Cologne – Cairo – Capetown tour, because it was the hardest I had done at that date and the first proper long bike tour. After it I decided that I will continue and travel more, add challenges to keep it interesting.

Before that trip, I just backpacked around the world one time, cycled a bit in Europe, over-wintered in India, no clear goal. That changed.

Indian or Japanese food. I really can’t decide, they are both absolutely amazing.

I guess Indian food has a slight edge, because it is so much cheaper, so the average budget traveler can get a lot more of it than Sushi. 😉 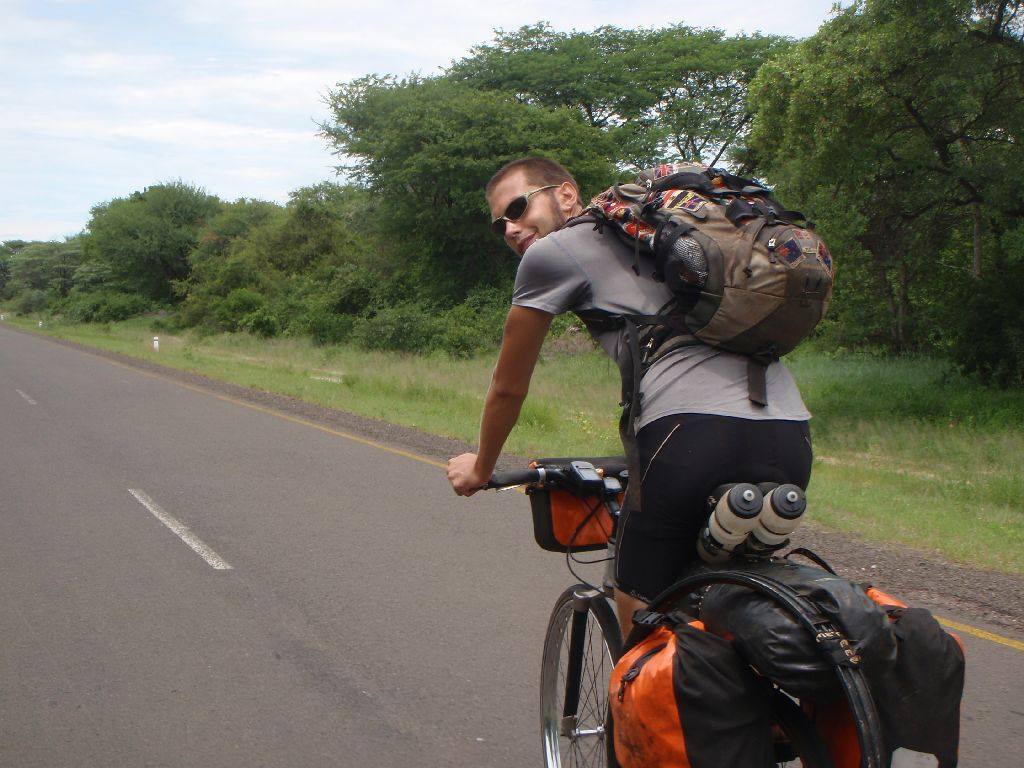 Patrick traveling with his bicycle.

Sure, plenty. I always liked the idea behind Goethes Faust, that any new experience is good, even if it is a bad experience.

The Sahara was a challenge, as were the times I got stolen from. One bike gone, another time a handlebar bag with camera, credit card and laptop. Or the time a crocodile got the better of me. Or when I got dengue fever. Or when the crazy border guard in Somalia almost had me arrested. Other times it was just loneliness. Or hunger.

What has been you favorite destination on all the trips you’ve done? Please tell us why.

The Andaman islands, which are part of India. The main land is so smelly, crowded, noisy and tiresome, that the 3 week break I had on these very remote and empty islands was heaven. $1 for a beach hut, a hammock, good food, good people and a couple of good books.

The other would be Cape Aghulas in South Africa. Reaching this location, the southernmost place of the continent, made me suddenly realize how far I had cycled. 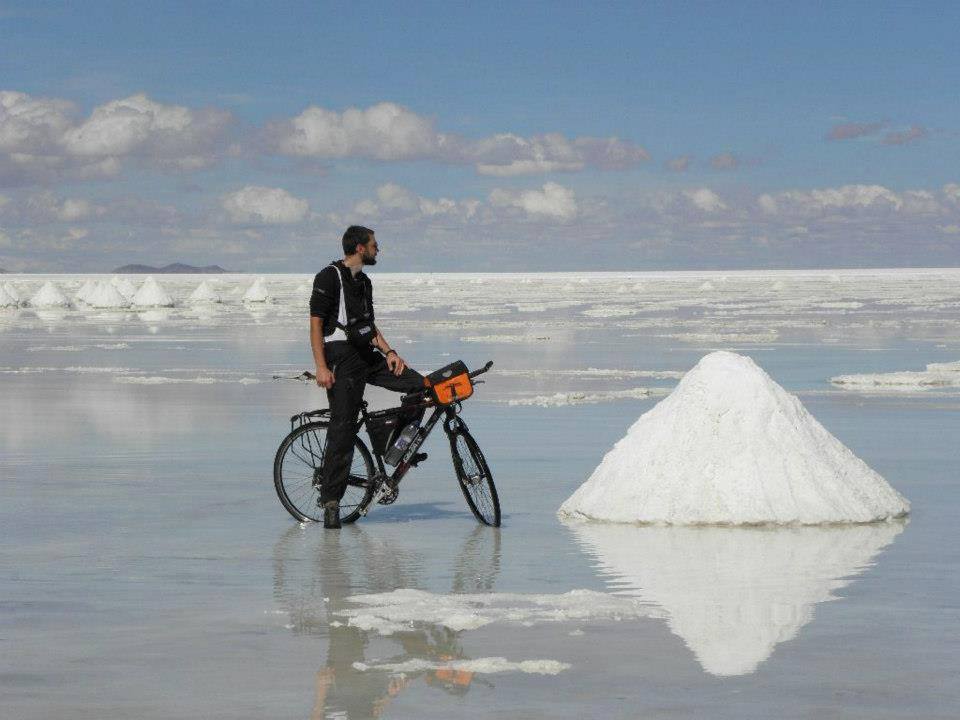 Bed-bugs are the worst. Encountered them two times, in Mumbai (India) and in Alice Springs (Australia).

Otherwise I had all kinds of dodgy places, from highway bridges, construction sites, brothels…

Best would be couchsurfers/warmshowers hosts with disposable income, nice hotels in cheaper countries, or any apartment you rent for a month or so. It is a big difference between a hostel and your own place.

Are you planning for a new trip or do you already have a new trip in mind?

Always. I have a file with future projects on my laptop. It has 23 entries at the moment.

Its easy to find love while you are traveling?

Yes. Just as easy to lose it.

Try this sane (crazy) person Bagoly Levente who is cycling very long distances on fixed gear bikes, or this even more sane (super crazy) person Olivier who spend 7 years cycling and sailing around the world, carrying a paraglider and trying to avoid any forms of motorized transport.

Amazing interview, thanks for your time Patrick Martin Schroeder!

Patrick Martin Schroeder’s been visiting 130+ countries around the world by bicycle. He’s been traveling from 2007 with his bicycle in a low budget. You can read his stories and statistics about his trips in his blog. He told us how to cycle around the world. How to finance his trip also if you want to decide to do the same. Feel free to follow him by Facebook or Twitter

If you want to follow another bicycle trip that I did in Europe, from Spain to Norway, check here.

[…] stories, take a look at my bicycle trip from Spain to Norway, 5 months and 10 000 kilometers. Or read Patrick Martin Schroeder story who’s been traveling more than 130 countries by […]

Interview with Jin from Universe With Me - Gamin Traveler

[…] check my bicycle trip around Europe during 5 months with almost no money. Or read the stories of Patrick Martin Schroeder and Dave. They have been traveling around the world for […]

[…] you want to read more cyclist stories click here, to read the interview with Patrick Marting Schroeder who´s been traveling by bicycle 130+ […]

interesting philosophy on life and he must see it in all its fantastic forms out there on his bike - wish I had the courage (or the fitness!)

Patrick has a lot of courage! I´ve been traveling by bicycle and I know how hard is that.

But also the experience is amazing!